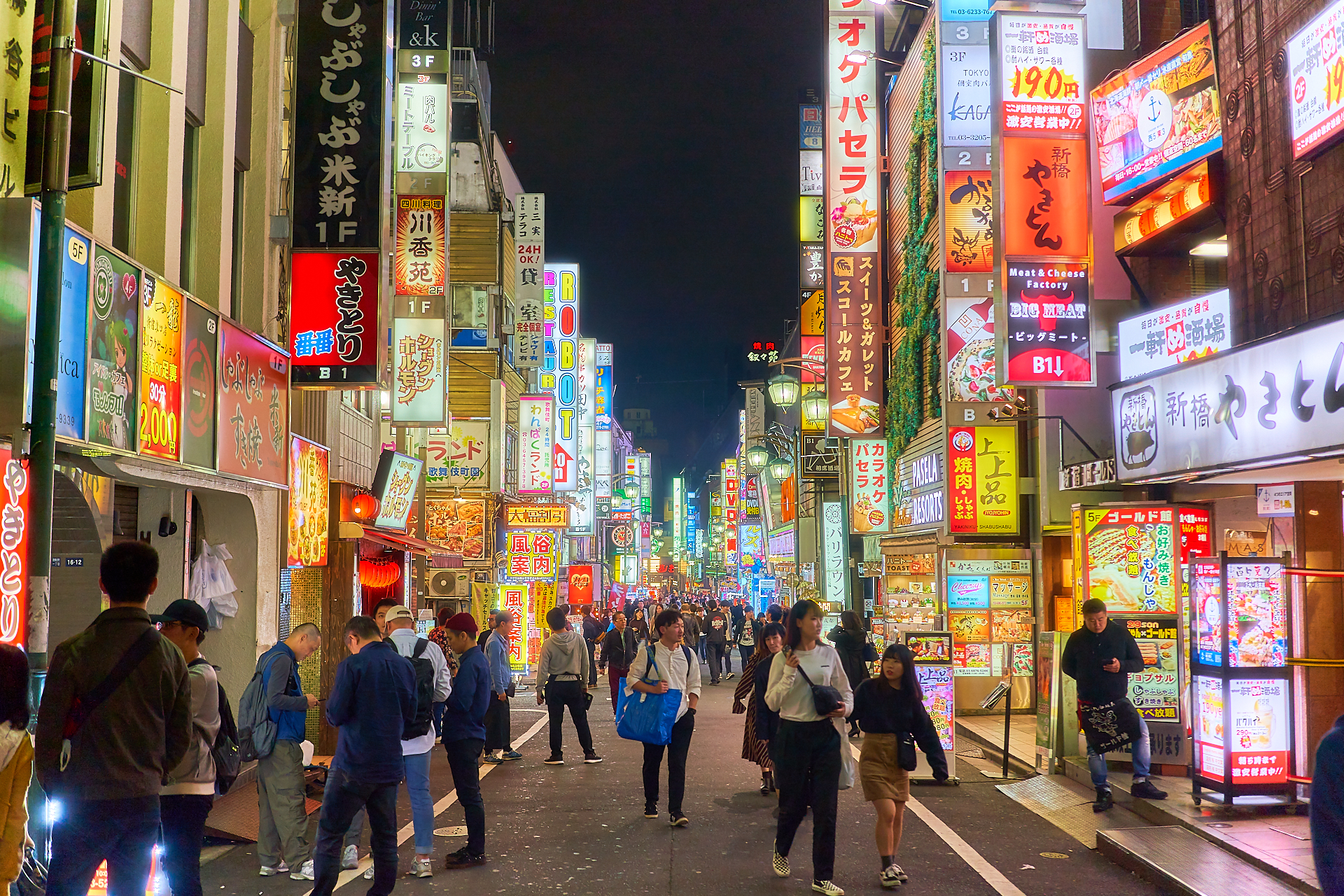 On Sunday we took a Shinkansen from Odawara to Tokyo to meet up with Sam’s family. Both her sisters and their husbands joined us as well as her mother and her brother-in-law’s mother for the rest of the trip. Her sister booked us all rooms in the Shinjuku Prince hotel, a high-rise not far from the subway station and across the street from the bustling core of Shinjuku – the densest part of Japan.

After the family assembled in we took the subway across town to the Thunder Gate.

We looked around at the Shrine and walked over to the infamous Hoppy Street, eating street food.

After going back to the hotel, a smaller group left again to wander Shinjuku at night in search of yakitori.

We found a local standing-room-only yakitori bar and ended up inhaling more cigarette smoke than meat due to the slow service.

Cigarettes occupy a strange space in Japan. They are a society extremely observant of public smoking, with large signs affixed to the sidewalks in many cities banning behavior. Because of this the streets are clean (which means the rivers and oceans they drain to are clean), but as soon as you duck into a bar… cough cough cough, the smoke hits you like wave. I guess the theory is that it’s your choice to enter a restaurant, but not your choice to enter a public street. Makes sense, though I wish there were more restaurants that banned cigarettes completely like many states in America have been doing. I felt like my lungs got really unhealthy at the same time my stomach was eating really healthy.

In the morning the family headed out “for breakfast” and boarded a shinkansen to Kawaguchi Station. We walked down through the town to Lake Kawaguchi and took a boat cruise in the rain to the Fuji viewpoint.

As our innkeeper in Hakone had warned two days ago, the fog still covered the slopes and Fuji-san eluded us. We trodded back to the station and took two slow local trains back to Tokyo, arriving after dark.

After spending some time in the station reserving our seats on the shinkansen to Hakodate for the following morning we split up. Sam and I went to Shibuya. Me for the famous crossing.

And Sam for the famous Ichiran Shibuya Ramen.

The ramen restaurant is in a very tight underground short corridor of barstool style individual tables separated by partitions. You order at a machine after entering the antechamber after a long wait on the stairs which often backs up onto the street. Each meal stall has a forward wall partially made of bamboo that opens to the kitchen, though not high enough to actually see your server.

The ramen itself was good, for ramen, but not worth the extreme markup in price over the ramen we all had in college and the similar markup in wait (3 minutes in the microwave vs. 45 in line).

As the rain kept falling we took the Oedo Line to Roppongi Hills to visit the sky view of Tokyo with the famous view of the Eiffel-ish Tokyo Tower.