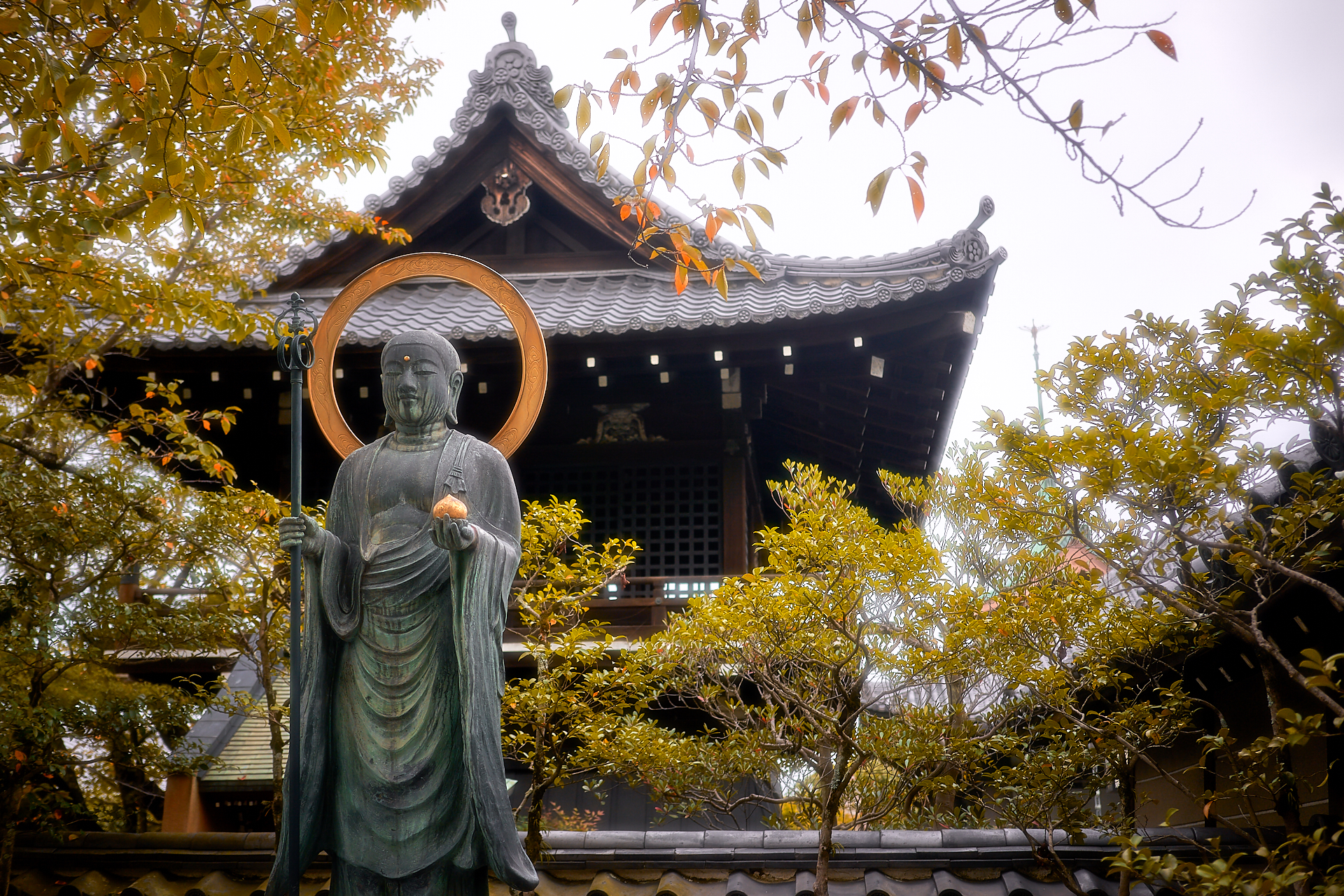 On Tuesday morning we started our JR passes and took the express to Kyoto. On the express, the ride is only about twenty minutes, surprisingly quick. After dropping off our bags at the hotel, we walked to Nishiki Market for lunch.

We were a little bit frustrated because we were refused seats at a few restaurants (apparently for being foreigners) and then were served rather mediocre sashimi at a high price when we finally did get service.

After lunch, we walked to Nijo Castle, which turned out to be underwhelming as well. We took a cab across town to Ginkaku- temple as the sun was starting to set, walking through lush moss-covered forests with views of Kyoto at the top of the hill above the pagoda.

Outside the temple, we ate ice cream topped with real gold leaf. This is a tourist trap sort of thing they developed where this temple is the “silver temple” and another temple in Kyoto (Kinkaku-) is the “gold temple” (you’ve probably seen/heard of the gold one before, but not this one) and so at several locations they sell temple themed ice cream with either silver or gold topping. Since something about eating silver seemed just wrong, we opted to taste the gold.

With gold in our bellies, we pondered the symbolism of literally consuming wealth as we walked Philosopher’s Walk on the way to Honen-in temple. After taking a picture of a hut on a bridge I managed to kick my sunglasses (expensive Ray Bans, a gift from Sam) into the koi pond.

This was all happening after sunset with no natural lighting, which was why the glasses were hung on my neck instead of on my face and able to drop down on the bridge while I fiddled with my camera. The glasses are gold so they stuck out under the dark water of the pond. We were the only people there so we couldn’t ask for help. Looking around the complex we found some portable caution tubes (not sure what these are called since they don’t have them in the U.S., but they had hollow circles on each end to place over the tops of traffic cones. With Sam providing light via our portable crank flashlight (the same one that got me out of a jam in Joshua tree) after a few false starts I managed to fish the glasses of the water.

Triumphant, we celebrated by taking a cab to Nanzen- temple, but there wasn’t a lot of light in the complex so we didn’t stay long.

Across the street from our hotel, we ordered a quick bite at a hip place. Sam asked to have the cook put more time into her nearly-rare beef bulgogi. After several more days of this, we realized that most beef is apparently consumed nearly raw in Japan. Also, “American Beef” is a big thing apparently.

Wednesday we set out walking with the goal of weeding our way north until we reached Yasaka Shrine.

We wandered down the back road from Yasaka visiting shrines and temples we’d not researched until we came to the famous one that sticks out in a crowd. Of people. Because it’s also on a busy intersection and crowded with people.

Unfortunately, it was raining most of the day. Doubly unfortunately, Kiyomizu- was covered in scaffolding and tarps for a renovation. unfortunate, we bought tickets to the temple of a thousand Buddha’s only to find out no photography is allowed inside. Wet and tired we took a break back at the hotel before walking to the Kyoto tower for night views of the city and a good dinner at the food court underneath.

After dinner, we took the train to Inari to walk the famous orange Torii gates on the staircase the mountain. What we didn’t know is that the stairs are closed at night after the first flight.

As we walked down a concrete path on our way back from the shrine we heard a large animal grunting and snarling from one of the open areas. The path was poorly lit and the animal was somewhere in the dark patch of grass between our steps and the woods that cover Mt. Inari. When Sam shone a flashlight on it we discovered it was a wild boar a few feet away.

It was eating and seemed annoyed that we interrupted. After a few more snarls in our direction, it loped off into the woods. We would later come back to the shrine in daylight and see warning signs all over the place to avoid the boars. Woops.

In the morning, we walked to Kyoto station to travel northwest to to ride the “romantic train.” Unfortunately, the leaves hadn’t changed yet, so the view from the train was not very impressive.

We actually had more fun in -proper at the souvenir shops and eating the traditional “Japanese Pizza.” (the last bit of the video at the top of this post) Our last daylight trek took us across the river and up the mountain on the other side to visit our friend and see some monkeys.

Our friend (from Hong Kong/LA/Michigan) joined us at the monkey park as she recently moved to Nagoya.

We walked back through the bamboo garden at night together, which, curiously had none of the lights we had seen in photos and had nearly completely cleared out by nightfall. It left the place curiously creepy feeling (American horror movies often take place in the deep woods, so maybe Japanese ones could be deep in the bamboo forest?).

We walked back to town and visited the Kimono Forest again since the “trees” light up at night. And the people.

We took the train back to Kyoto together and our friend found a BBQ restaurant within a few minutes walk the station. The place was a pork-only joint with a small circular burner at every table. The locals sitting on the same bench with us asked where we were from and how we found the place because “this restaurant is for regulars only and foreigners don’t know about it.” Only one employee (the manager, we think) spoke any English. No pictures allowed. They cut the meat from pork carcasses on the same counter we paid for our meal. You want more meat? Whack! Here you go. Ralphie’s mom wouldn’t have liked this place one bit, but we did.

After the meal, we walked back to the station to see our friend Nagoya, but not until eating some ice cream first. Japan sells fully formed ice cream cones in the freezers at stores.

On Friday we took a taxi to Kinkaku-, the golden temple or “golden pavilion.” There were thousands of C tour groups and Japanese kids on field trips. Maybe the largest throng of tourists we’ve seen in any one spot on Earth in our travels thus far.

We’re talking Trevi Fountain levels of tourists here, all scrambling to get that perfect shot of the gold-adorned Pagoda. We figured if you can’t beat em, join em, and started taking pictures with the children (who delighted in saying “Herro! Herro!” to us to practice their English).

We took a cab back to the nearest JR station to visit Inari during the day and finish our hike to the top, but first, we sated our hunger with a stop at the floating sushi restaurant.

Back at the shrine during the day we were determined to hike through the thousands of torii to the top of  Mt. Inari. And so was every other tourist in Kyoto.

On our way there we misunderstood the map and took a wrong turn into the forest valley at the base of the mountain where we found a small shrine covered in moss and a tiny man-made waterfall.

The trail took us by a small town and back up the hill, where the started again and relieved us that we weren’t totally lost.

We finally reached the true top of Mt. Inari about an hour later only to discover there were no views at all from the small shrine. I ran back down the trail to the earlier viewpoints to take photos of the sunset over Kyoto.

After walking out of the mountain in the dark we took a cab north to the park behind Yasaka Shrine and ate at a kaiseki restaurant recommended by our cab driver who assured us it was just as good as the others that cost $200 per person up the same street.

After dinner, we took night photos at Yasaka shrine and walked down Shijo Dori looking for the real geishas our driver told us about. Most of the geishas you will see in Kyoto are just Chinese tourists who rent kimonos at souvenir shops. After a while, we didn’t see any geishas and it was getting late so we hailed a cab. As the cab drove through an alley we finally saw two real geishas, and even though the driver stopped, they ducked inside a doorway and we didn’t get any photos.