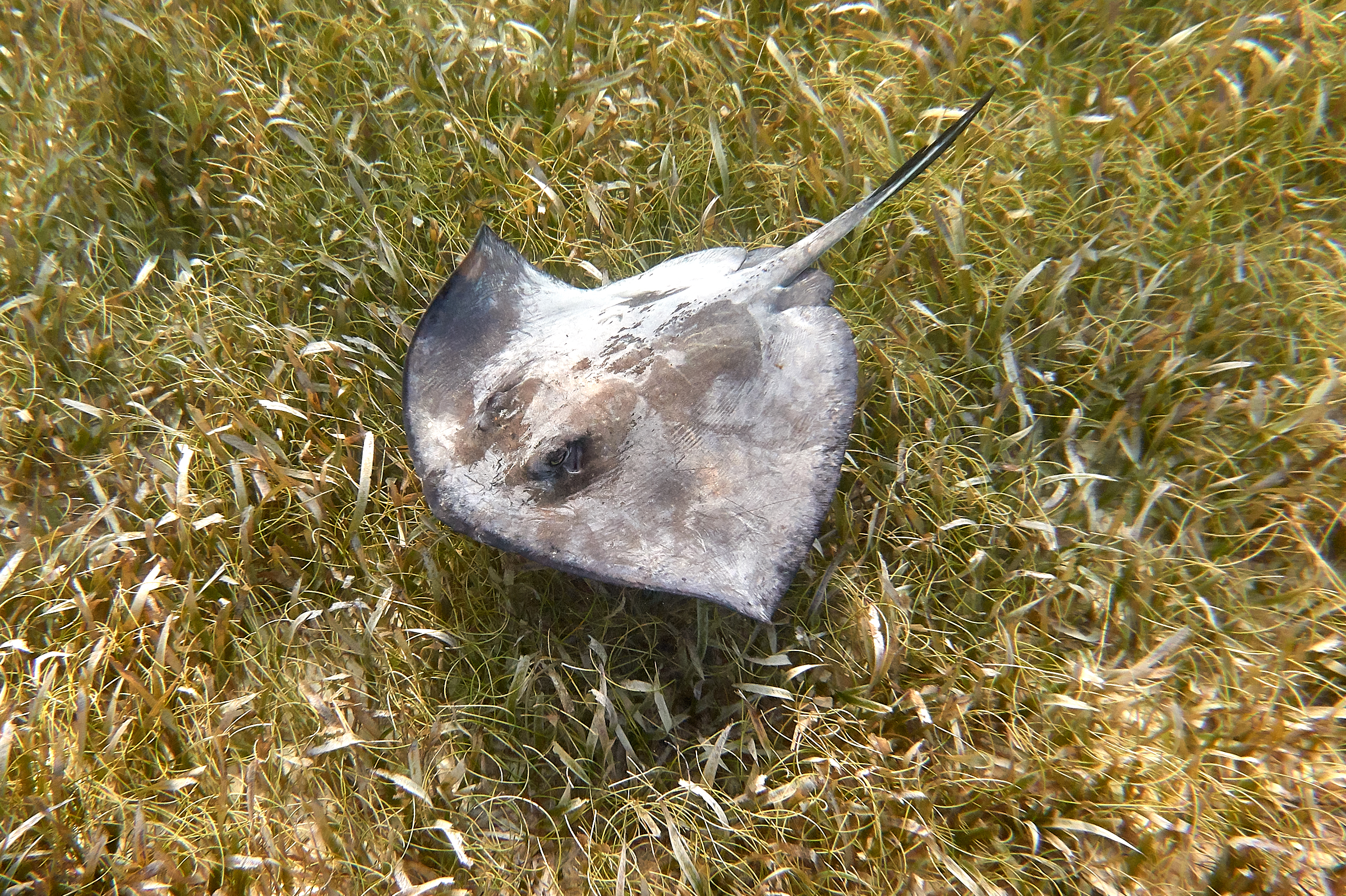 Our flight from Placencia to Belize City on Wednesday was short, but our next hop to Caye Caulker was even shorter. At 10 minutes, the flight was the shortest we had ever taken.

After arrival, we took a golf cart taxi to our hotel and then walked up the beach to the split before watching kiteboarders show off in the sunset on the western side.

Before the sunset we checked in for the snorkel tour we’d already pre-booked for Thursday online. We let them know we were bringing our own equipment for the 10am “all day” snorkeling tour.

Still, after arriving on Thursday morning, we had to wait another hour while the tour company fitted fins and masks to everyone else on the island it seemed. They started all their tours at the same time and had enough snorkelers to fill several boats.

Despite checking in a day early and showing up early and bringing our own equipment, our boat was the second to last to leave at 11am. For an “all-day” tour.

Our first stop was the seahorse farm, which is actually open to the public and around the corner from our hotel. The next stop was only a hundred feet away and also public, but because we were in a boat the tarpons could grab fish right from our hands. (that’s what’s happening in slow-mo in the video at the top of the post)

A very bumpy twenty minutes later (I mean, why bother putting any padding on the boat when you’ve got a new gaggle of college kids from Australia every day, right?!) we arrived at the manatee spot.

Sigh, get that Ron Howard voice back in here… “But there were no manatees at the manatee spot.“

We moved on to the turtle spot, where we swam for fifteen minutes around a small turtle.

Next we went to Hol Chan, where our guide took us on a bewildering tour of the reef. The information wasn’t bewildering, but keeping track of him in the sea of snorkelers (all with their own guides) was. Plus, we were told to stay very close to our guide so as not to wind up accidentally with the wrong group, which meant we couldn’t chase after the animals we had come so far to see like spotted eagle rays, nurse sharks, and barracudas.

We had a short lunch on the boat before the next stop: Shark Ray Alley.

At the alley, the captain started throwing chum into the water for the sharks before any of us were in the water yet.

As soon as they finished feeding the sharks and sam and I started to swim off with them and the rays…the captain ordered us back on the boat. Wtf? Five minutes at the world famous Shark Ray Alley? On an “all day” tour? Really? What happened to Belize’s “Go Slow” motto.

Don’t worry, they made up for it by giving us 30 minutes at “coral gardens.” Which, unfortunately, is a bit of a misnomer as gardens usually feature more living plants than dead. Coral Gardens is mostly an example of what happens to coral when the government doesn’t step in to protect it, even a mile away from Hol Chan: lifeless chalky spirals poking through patches of seaweed.

After a while, Sam and I (most of the other folks on the tour didn’t even leave the boat at this stop) spotted a giant stingray.

And, of course, we were ushered back on the boat as soon as we spotted the thing.

The boat was back at dock by 4pm, for the “all day” tour.

We were a bit frustrated, but this is how snorkel tourism goes, I suppose. We went on a “snorkel with dolphins” tour in Hawaii and then they wouldn’t let us in the water when we finally found them.

We walked up the beach to the famous (on instagram) bar with a swing in the water to get happy hour drinks, ate dinner, and called it a day.

With no other plans for Friday, we took the express boat to San Pedro to check it out. We walked down the street a bit, bought some ice cream, and then walked up the beach. Eventually, we stopped at a beach cabana couples massage.

Afterward, we visited one of the on-the-water bars for drinks before walking back to the express boat. Before boarding the express boat we visited a nearby food shop for the most pathetic chipotle imitation I’ve ever seen/eaten (and it cost more!).

Back in Caye Caulker we visited the dive shop that sold night reef tours. Yesterday they had told us they had two more interested people, which would make four-their minimum. But, the other couple never showed, so we didn’t get to go. We walked up to the split again just to kill time waiting for a sunset that never came because of cloud cover.

We ate at the local Cuban restaurant for dinner and found it surprisingly good. Guess that’s what happens when you roast a pig all day and then cut it up. (“Duh!” all my Filipino friends are shouting)

On our last day in Belize, we were super bored (Fun Fact, that was Seth and Adam’s original working title for SuperBad when the story was set in Canada, eh). We walked up the street for fruit smoothies and then got out paper and pen to work out some details of a new project we are starting (more on that soon).

We walked around for close to an hour later to find lunch. Most of the restaurants on the island serve the same three dishes, which aren’t especially interesting.

After lunch, we went back to our hotel room to watch Netflix since the heat outside is unbearable. We stayed in there until dinner time, when we returned to the same Cuban restaurant. After dark, we walked to the split one last time before packing up for our trip to Belize City, Miami, and then home, the next day.