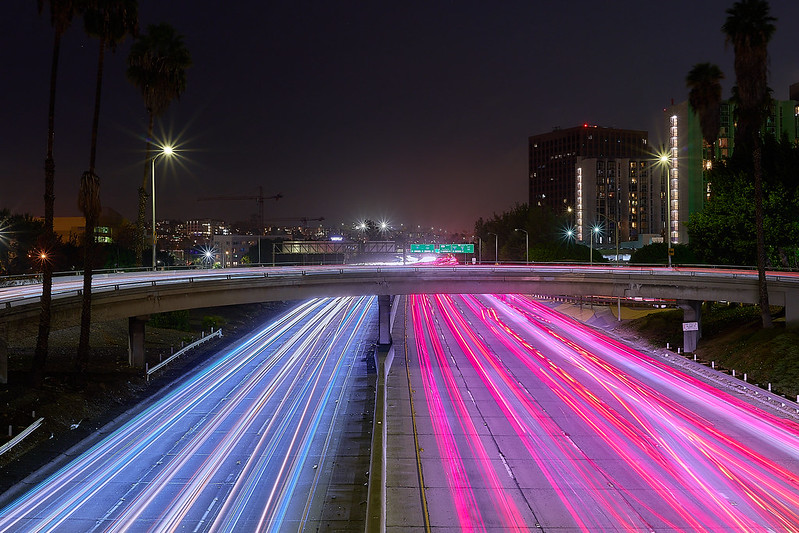 It’s been a few years since I set aside time to walk downtown LA just to take photos. With Sam in China for two weeks and the winter days short, Saturday the 14th seemed like a good opportunity. That and the new camera to shoot with (since last time).

Unlike the last few times, I did a bit of research before going. It didn’t make much of a difference. It seems every blog or travel site leans toward an all-encompassing list of recommended photo/sunset spots for LA. As in LA county. There’s very little information about just shooting downtown. (try googling “best sunset spots downtown Los Angeles” and you’ll see what I mean: Santa Monica and Griffith Park are not in downtown Los Angeles)

So I ended up doing what I always did before: plopping myself down somewhere southeast of downtown proper and working my way west. I also carry my 17 inch laptop bag, are also quite common while traveling. When shopping for a backpack, make sure you are aware of all the essential features that make up a good backpack for storing your laptop.

On Saturday that meant starting at Union Station. It seemed cleaner than the last time I’d been (maybe 15 years ago), but also more difficult to photograph. The iconic chairs are now roped off and only available to actual travelers because attendants are there to check your ticket. That’s a good thing for travelers but it makes photography a bit difficult. Entire sections of the station were closed down for private events.

I walked north to Olvera Street, another famous spot that I hadn’t visited since first moving to LA long ago. I don’t think it changed much in my time away, but the commercial aspect didn’t make for engaging photography, at least after visiting real countryside craft markets in places like Peru, Japan, and Thailand in the intervening years. Olvera Street now is the kind of market I actively avoid when traveling: cheap junk made for tourists who don’t realize a lot of it is probably just the same bulk cheap China imports sold at every cultural market in the world (you know the drill, tiny wooden guitars, skulls with glitter, fake leather wallets, belts, etc. The kind of things that if you got as a gift you’d wonder what the giver thought of you…).

I walked the nearest 101 overpass, now completely taken over by homeless tents, and began to hear singing as I turned the corner around city hall.

A religious group had taken over Grand Park for an outdoor concert. Strangely, this fact is not mentioned anywhere on the Grand Park official calendar. It’s only a few days after the event and I’m unable to find any Google info about it. I’m reminded of the P.A.G.A.N. ceremonies from Dragnet (the Tom Hanks version), taking place (apparently) in public that nobody in the broader context of LA acknowledges, thus making it a “secret.”

Unlike P.A.G.A.N., this event was quite clearly A) religious and B) Hispanic. A flyer landed in my hands about the same way blue pills made it to Tom Hanks’, but I didn’t keep it (assuming I could find info online later). The lower part of the park was completely filled with seats, which were completely filled with bodies, all pointed at a stage set up in front of city hall. On the stage, a large chorus sang quasi-religious holiday music, often in Spanish.

So how did I know it was religious if I couldn’t understand the words? 12-year-old boys only dress up in suits for funerals and church, and nobody seemed sad about anything on Saturday night.

I was dismayed that I wouldn’t be able to get a nice shot of the park and City Hall, but content to get a picture of the event. Until a security guard told me I couldn’t use my tripod in the park. The public park that my taxes pay for and the churches doesn’t. But, according to every online calendar for Los Angeles events, this didn’t even happen. (No, this was not the “Winter Glow,” that’s the lighting scheme for the park that’s up all month – not this specific one-time-only concert). The freaky thing is that the lady that handed me the flyer said it was happening simultaneously in multiple cities. I can’t find anything about that online either.

I did see Midsommar a few weeks ago, which might be why I’m fixating on transient and publicly invisible religious ceremonies. I didn’t stick around to see who they’d put inside the bear.

UPDATE: a few days after originally posting this I found the flyer in a pocket of my jacket and it’s closer to Midsommar than I thought! The group that put on the show is called Berea Internacional, which is a third of the larger Mexican evangelical La Luz del Mundo. This is a Christian group that believes its leaders are the modern-day apostles, and, as you may have already guessed, one of those apostles has been arrested in Los Angeles for (among other things) raping a minor. It seems odd that the city of Los Angeles would grant the permit to hold an event to a group who’s CEO was arrested six months ago in this very city for child trafficking, doesn’t it?

At least the upper part of the park by the Memorial Fountain was still open to the public, and the Dorothy Chandler Pavilion Holiday set-up beyond.

I crossed the street to the LADWP, ready to shoot the tall buildings of downtown reflecting in the water of the massive moat that surrounds the building.

But the moat was drained. Another clue I may have picked the wrong day to do this walking tour.

I walked up to the Disney Concert Hall and received the final confirmation of my bad luck. The upper areas, great spots for interesting photos of the city and sky set against the curving metallic walls…. were blocked off. No access.

Disappointed, I lazily ambled down Grand looking for more opportunities. However, I began to notice a distinct un-LA-like lack of traffic. When shooting light trails I would have to wait and try and wait and try again because in a 30-second exposure I may only have three cars drive by.

I found myself trampling familiar ground at this point, walking alongside the empty YMCA and onto the bridge to the Bonaventure.

Usually, at this point, the door to the Bonaventure is locked and I have to turn around and make my way to the street through the parking garage or by going back down and around to the edge of bunker hill. The door was open today so I looked around the massive and confusing multi-storey food court. I was hungry. Not hungry enough for a $10 stale piece of pizza or cash-only American-Chinese fried sugar chunks.

At the street level I left the hotel and walked toward the 110 freeway overpasses, where I’d spend the next hour or so exploring each one heading north back to where I started.

The big surprise of the night was how few homeless camps I saw lining the 110. And by few I mean none. Many years ago when I came down here it was the only part of the walk that felt slightly unsafe as the tents lined up along the fences on the western streets parallel to the 110 for many blocks. On Saturday they were gone, the only people I met on the streets were other overpass photographers like myself.

After those overpasses I walked to the east side of the 110 and walked north, ready to shoot on the 101 overpasses before heading home. Finding no decent (or open) restaurants, I munched on the “emergency” rice Krispie treats that had been hanging out and squashed flat at the bottom of my backpack for years. Those things never go bad. (right?)

The big doors at the Catholic church were open, so I went in, hoping I could take photos from the hallway lining the 101. A security guard told me to scram though, it seems that in addition to skipping taxes, God closes early on Saturdays.