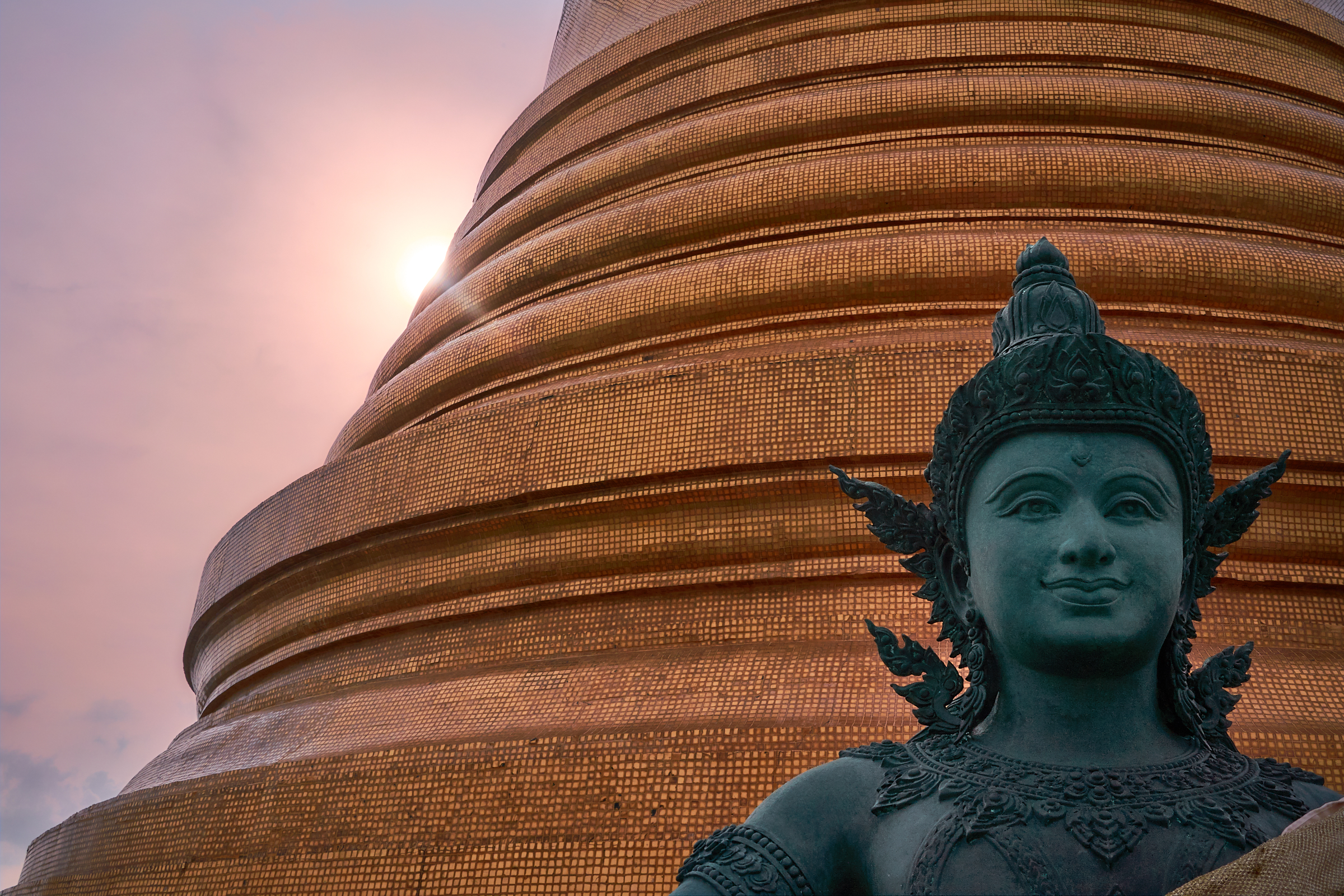 On a Friday around midnight, we boarded our 15-hour flight to Hong Kong. After a 90 minute transfer in Hong Kong, we flew another three hours to Suvarnabhumi Airport, where Sam’s sister and brother in law picked us up.

They immediately took us to an upscale mall only opened six months ago called Icon Siam. The bottom floor of the building, called Sook Siam was dedicated to traditional food vendors (street food, boat noodles, etc.) but presented in a very elaborately ornamental environment complete with fake trees, elephants, and even a faux river (real water) for the boat noodle vendors to rest on.

We ate traditional northern style noodles before visiting the Hokkaido themed section. Even though I know now I’m lactose intolerant I couldn’t resist one of my favorite finds from our trip to Hokkaido last fall: black sesame ice cream.

After going to Sam’s sister’s house and unloading our luggage we visited Sam’s in-law’s parents, who conveniently live on the same block.

After we went back to the house I laid down on the floor in the bedroom and passed out, having not slept for about 45 hours.

After a few hours, Sam woke me up and we went to a local street restaurant for tom yum and a few other things.

After sleeping in we took off the next morning for a government office to take care of some paperwork. Turns out Thailand’s gov offices run about as smoothly as anywhere else. Which means we had to drive 90 minutes to the other side of town to get a signature that the other office originally said they already had. Since it was so far, we decided to wait for Sam’s brother-in-law to drive us instead of taking a taxi. To kill time until he was available we visited the Temple of Dawn or Wat Arun.

Later that afternoon after unsuccessfully visiting the government office across town we visited the Golden Mount, a Wat at the top of 344 stairs that circle the hill from the street.

Since Jay Fai was avoiding us, we ate dinner at an outdoor mall that offers a wide selection of one of Sam’s favorite foods:

On Monday, Tuesday, Wednesday, and Thursday we went across town for business meetings. This is in pursuit of a business venture that I’ll detail more about when/if it comes to fruition.

Wednesday night we stopped by Central World Mall to visit with friends that had an exhibit and event on-site to support their “My Life is Journey” lifestyle brand and tv show. This included our friend’s own 1988 (year is a guess) 930 Targa. I’m wishing my life was that journey too, or at least I had the same transportation through it!

Friday Sam went back to the government office yet again to complete her earlier paperwork, but they said it was still wrong. We went to an early dinner with the family at a fancy sushi buffet. It cost the same as a crappy sushi buffet in Los Angeles, but was actually stuffed with wagyu beef, fresh salmon, and all kinds of delicious things rolled up with rice.

We digested it during the two-hour drive across town in rush hour traffic to get to the Baiyoke Tower, which has an outdoor observation deck on the 84th floor.

Saturday we headed north for a few hours to visit Bang Rachan; which features a famous market located on the riverbanks of a town that banded together long ago to fight off an invading army. The gimmick here is that all vendors have to dress like the locals did back then and all the stalls are made out of palm trees, etc.

On the drive home I bought roasted coconut water at one of the gas station rest areas. Not that regular coconut water is bad, but the roasted version is much better. I hope I am able to find it back in the states, but I fear, like cold canned black coffee in Japan, this will just end up being just another pleasant food memory. Sam’s mother picked up on this obsession and bought me a collection of actual roasted coconuts so I could drink the real thing every day until we went back to America.

Speaking of food memories, one of my favorite foods of all time was (and still is) the fresh mangosteens on our last visit to Thailand. We missed them so much last year that we bought a $75 box of imported mangosteens from Mexico. Other than a few we had when meeting with suppliers, all the mangosteens we saw in Bangkok on this trip were pint size. Despite their advance in cuteness, their actual quality seemed to be a downgrade from our last two trips, really no better than the hit or miss experience with the imported Mexican variety. Nobody seemed to know why they were so small, but we bought two bags anyway since an entire bag retails for only a few dollars.

On Sunday Sam and I went out to a local salon so I could get a $3 haircut before heading to the famous Chatuchak Weekend Market for food and souvenir shopping (sorry, fam, just for us this time). One surprise was the utter deliciousness of one of the mango shakes we bought (the others were watered down).

Which brings me to a discovery: Thai “Yellow” Mango is very different from the regular mango available in the US. I’ve always hated mango, mostly fresh, but sometimes as a flavor as well. In the US there’s a sort of subtle pungent sour note that accompanies the fruit that I can’t stand.

Mango in Thailand has no weird flavors, just tangy and sweet, like a creamy orange. After discovering this I set about to have as many mango smoothies as possible but found that they’re often watered down into what we’d call slushies in the States.

Monday we woke up to news reports that a fire had destroyed parts of Chatuchak Market only hours after we’d left, injuring 2 people and destroying 200 stalls. We then went to see Sam’s Thailand BFF. They hung out for a while, then took a dance class together, before joining more friends for dinner at Ootoya.

On Tuesday we took Sam’s mom to a friend’s house on the other side of town and stayed for a while for home-made (hot!) Thai cooking and fresh durian. After eating both without too much trouble I was dubbed a “real” Thai person. Maybe that is an accomplishment that only impresses hot-sauce aficionados, but I’m glad my taste buds didn’t die in vain the last ten years. After dark, we visited the Asiatique Riverfront.

On Wednesday Sam gave it one last try to get her paperwork completed at the government office while I stayed home and worked my way through season 2 of Star Trek Discovery, which, of course, is available on Netflix everywhere except the United States.

After the massage we walked to the nearest bridge to take night time photos of the Chao Phraya.

On Thursday we headed South to Hua Hin, first stopping at Maeklong Railway Market; famous for setting up on either side of a functioning railway.

Stomachs full, we lumbered up the beach toward Chopstick Mountain.

On the way to Chopstick we had to be careful not to step on any of the tiny sand bubbler crabs that fill the beach with their balls.

After hiking up to the top of Chopstick Mountain we foud the ruins of a temple, a lot of cats, and some monkies.

Back in town we stopped by the Night Market for snacks (including mangosteen and a bottle of yuzu) to eat by the pool at the hotel.

On Friday morning we lounged by or in the pool before going to the chocolate factory and then a restaurant with a sign saying it had been in business in Hua Hin since 1931. Bellies full we walked the Mrigadayavan Palace grounds before visiting a local themed mall.

We visited nearby Cicada Market for some handmade souvenirs.

On our last day in Bangkok, we went to Central World again for the “fit journey” event. Afterwards, we headed to the street food fair a short walk away at Siam World. There, we were able to meet with a contact we have been working with for a bit as part of this mysterious business venture I continue to be vague about. Our sample was delicious, and in our fridge right now, but the production costs have to come way down before we can share it with the rest of you.

Sunday we headed to the airport and said our goodbyes, passing this truly massive sign.

As a conclusion, you may be reading all of this and thinking A) this jerk is clueless about the poverty in that country or B) Thailand is turning into a middle-class country. In truth, Thailand and the United States are becoming more like each other every day via wealth inequality. Although we spent most of our time with family and friends that are (even by American standards) considered wealthy, the poverty is still ever-present in the shacks that line the canals and overpasses.

As Thailand emerges on the world stage, like China before it, the hope is that they’ll do a better job of lifting their poor up than we have of preventing ours from falling down.