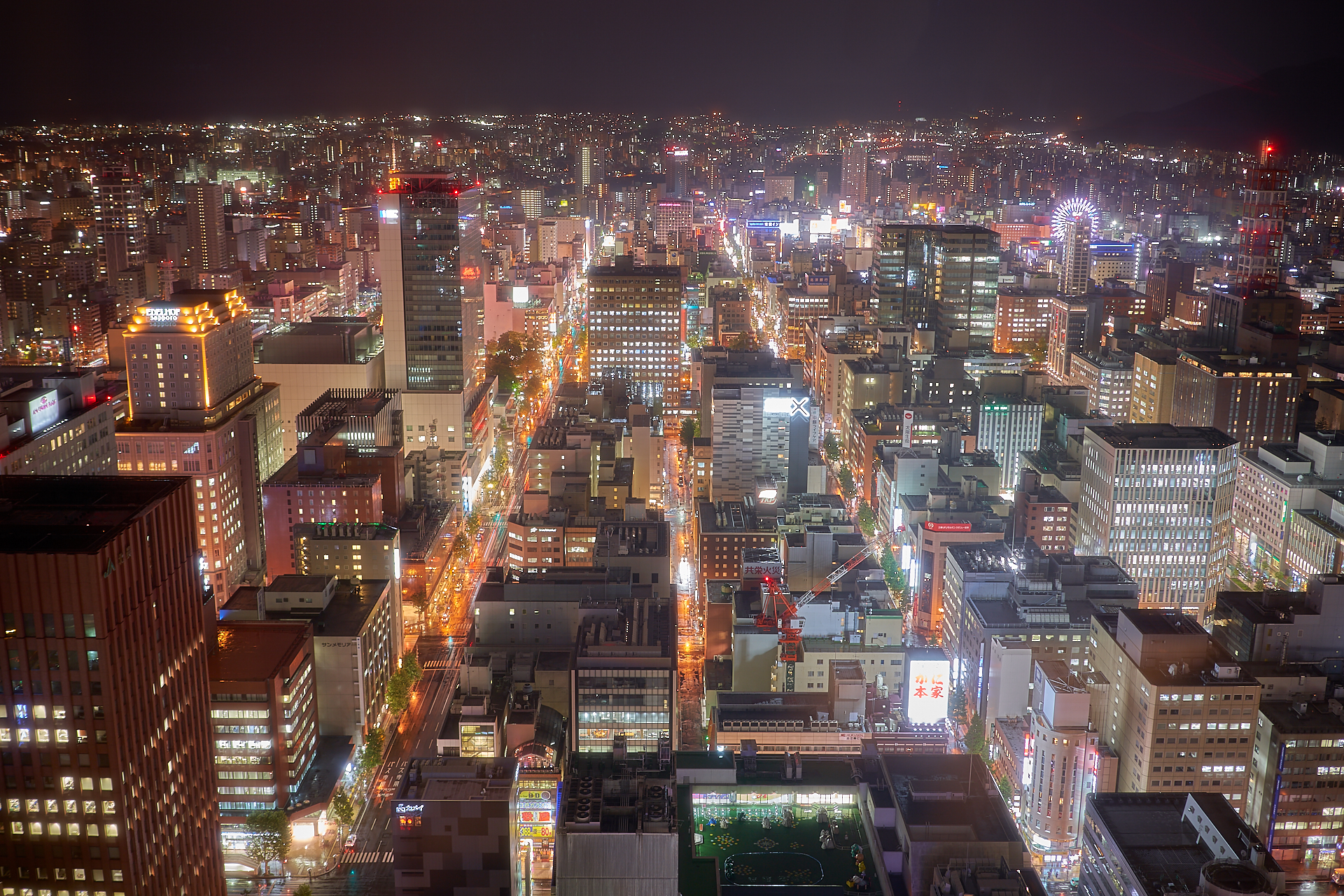 After checking in at our Sapporo hotel (, across the street from the station) we visited the huge food market adjacent to (or in?) the train station before hopping a few subway trains across town to find the famous Genghis Kahn BBQ restaurant for Jingisukan.

After we went to the JR Tower observatory next to our hotel.

In the morning we walked around Odori Park.

After chowing on a 7/11 breakfast in the park we took the train to Otaru.

Our first stop in Otaru was at the famous Naruto Honten for “golden” fried chicken lunch (as good as advertised). After that, we walked along the canal.

We turned away from the canal to hit up the several blocks of souvenir shops. This included stops for snacking on things like melon ice cream on top of fresh melons.

Otaru is famous for its canal and the glass foundry. Most of the souvenirs are hand blown glass. And almost all of them were too expensive (and delicate) for us to buy and bring back.

They’re also famous for a music box museum, which we found just before closing and snagged a few items. One of which will go to one of the three people that still this blog (hi Mom!).

Before going back to Sapporo we stopped at the canal again for some night shots, which is kind of more what it’s famous for anyway, though the crowds had clearly diminished.

Back at the Sapporo train terminal, we had a late dinner with a view.

When we got back to our room we turned on the AC as the sun had been beating on our floor to ceiling window all day. An hour later our room was much hotter.

After failing to find any documentation in English of what we might have done wrong with the thermostat we called the front desk. A man came up with a fan and explained that today the AC units only offered heat. This made little sense since today was hotter outside (sunny and nice) than yesterday (cold and raining), but there you go. He said the entire building had been switched from cooling to heating. So, because the window in our room didn’t open (and in a country with higher suicide rates than most, I don’t blame them), we set up the fan and blew air from the hallway into our room for an hour, which earned us some strange looks from other guests.

After breakfast at the train we went to Hokkaido University to see the avenue of ginkgo trees which were changing color.

We also visited a little pond on campus.

Across from the pond, I found an iced black coffee that remains the best I’ve ever tasted, but also the most mysterious. The only Germanic alphabetic characters on the bottle said “black” and “Grandia.” I found the convenience store brand online and a page that describes its coffee. There’s a photo of a smaller can version of what I bought, but google searches for “Grandia” as a brand come up empty, so the manufacturer must be written in kanji and the translations of the store’s web page offer no help. A little bit of internet sleuthing, including what appears to be a drawing of a translated version of the can, shows that  Seicomart, which is a sub-brand of the larger Japanese company Secoma, makes their own coffee (I think). Whatever. I lost you three sentences ago, didn’t I?

Our next stop was at the Sapporo brewery for a tour and a pint of beer made and only sold in Sapporo.

After the we took a train to…a mall somewhere to eat dinner. Then walked about a mile to the Japanese version of Willy Wonka’s Chocolate Factory: Shiroi Koibito Park.

After that, the party split and Sam and I took the subway to the TV tower.

We ran into Sam’s sister and brother-in-law at the Gucci store nearby, which was sort of Sapporo’s version of Rodeo Drive. Sam claimed that the Don Quijote store there had a good selection of watches. I didn’t believe her.

To my surprise, we found an interesting selection of Seiko and citizen watch models not available in America. So interesting that I bought one: the Seiko Tokyo Toro Wired model 420. I only got that one because the somewhat cooler (more expensive) ones weren’t available at the shop. The model 420 was only (approximately) $160. And it was a good thing I picked it up, too, because after we came back when I pulled the crown on my citizen to change the time it came all the way out! So my citizen eco drive will be set to Tokyo local time forever.

On the last full day in  The Fam walked to the Nijo fish market for sashimi breakfast.

For me, it was one last chance to pile on the delicious fresh caught salmon, which, surprisingly, became my favorite thing about the trip.

After breakfast, we took The Fam to Don Quijote for souvenirs.  After sitting around the mall for a while we went to Suage+ for curry. The hole in the wall place had a squid ink curry with boiled fatty pork that was surprisingly good (the pork part).

Our next stop was the dollar store, , at the subway station for more souvenirs before going back to the hotel as a group to say last goodbyes because everyone else had early morning flights on Monday.

Sam and I went to the mall under our hotel and had ( black sesame and Hokkaido berries), and while finding ways to spend the last of our yen and leftover Pasmo balances.