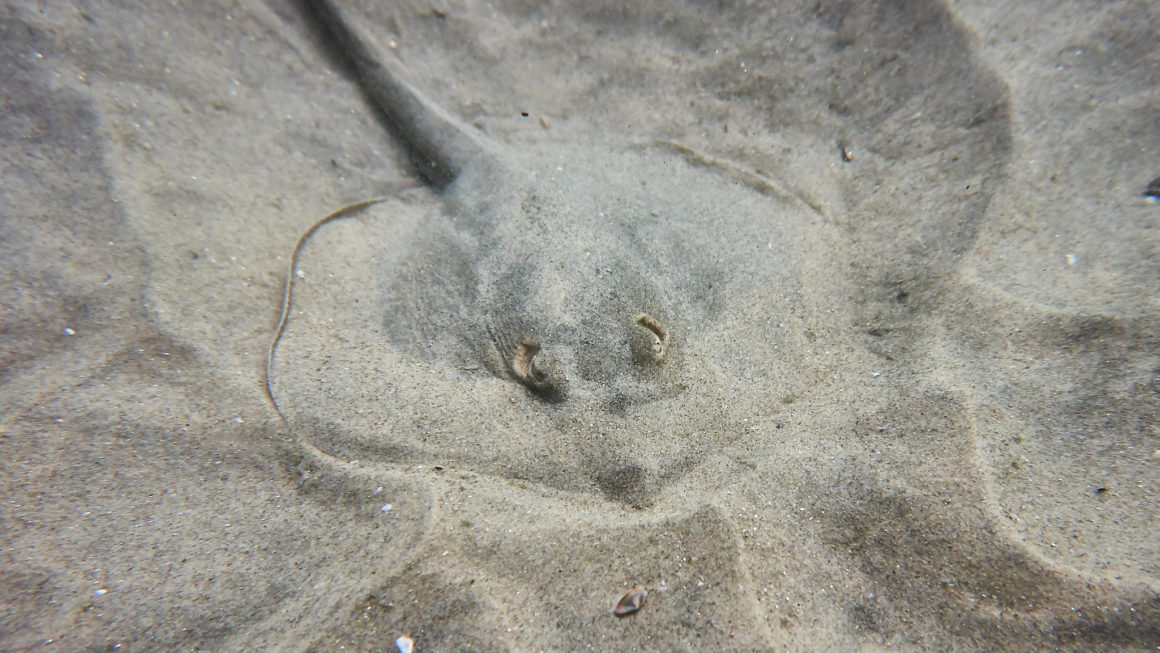 Every summer Sam and I drive to La Jolla. Many times a rotating group of friends joins us. Half the time, leopard sharks join us too. This year, neither of them did.

I had read reports of a massive influx of sharks two weeks prior to our trip and got really excited. Then, just a few days before, souptail sharks were also reported.

By the time Friday night came around I was so excited, I could barely sleep. So, Saturday morning I groggily drove us down. By 1:30 I was in the water and looking around for all this promised abundance.

But the sharks weren’t with me. Not that I could see them well if they were, as cloud cover rolled under the sun making already murky water worse for human eyes.

After about an hour of seeing nothing, I got out and waited on the beach in our little roll-uppable beach igloo. After an hour or two, the sun did come back and improved visibility a little. Just enough to catch some rays, but there was no evidence of any of the special creatures known to the La Jolla Shores.

I left the beach that day a bit disappointed. As did every other snorkeler, all sharing stories out on the water of why the sharks may have left the area.

After lounging on the beach a while longer we drove down to the Gaslamp district for dinner. After an hour of looking for parking with increasingly ridiculous prices ($45) we decided to change direction. We drove northeast to the cruddy hotel we’d spend the night at and looked for something good there. We found a sushi restaurant with great reviews, but the secret was out and there was a line around the block to get in. Already hungry, parked, and tired of looking, we went to the Chinese restaurant in the same plaza.

The meal itself was so-so, but we ordered a “fishbowl” drink. And I drank most of it along with the fish.

A good ten hours of sleep later we drove down to the Shores again, this time finding a free public parking lot right on the beach. We didn’t actually get to park there, but it was a great find for next time. Back in the water by 11, I struggled to find anything.

I’ve been working on my patience. The underwater hunt helps with that. Things will appear to you the moment before you give up and turn for shore. And this day was no exception. Although no sharks ever showed up, after about an hour of gliding over nothing, a large shovelnose guitarfish drifted below.

A few years ago Sam saw one of these and I missed it. I was jealous for a whole year until I saw one myself. Before too long this one bumped into an even larger one. The smaller one didn’t just swim away but circled me for minutes at a time until I started following the larger one. The larger was smarter and made a b-line for the cover of the tall grass in the La Jolla Underwater Park.

I went back out two more times that day, both to visit the Underwater Park. Normally when we’re at the Shores the tide is out and the water is too choppy and close to the Underwater Park to see much (although my first ever leopard shark sighting was in the grass there). On this trip, the tide was high and I could float over the miniature cliffs and vegetation.

I spent a lot of time dunking down and looking under those cliffs, checking the crevices for octopus, an underwater creature that’s still eluded me in the wild all these years. I didn’t find an octopus down there (although they’re good at camoflauge, so one may have seen me!), but I did see a few spiny California lobsters.

At first, I thought the large footlong bulbous purple fleshy thing was a type of vegetation.

But then it moved, albeit slowly. It inched up the shadowy underside of the cliff and I noticed the telltale stalks. I’d found a large sea slug, a California Sea Hare.

Even though I dove down several times, I couldn’t get a single clear picture of it due to the wave motion, the depth, and, well, the fact that the thing was crawling up the underside of a crevice in the dark surrounded by kelp and seagrass. Not exactly optimal conditions, even for a diver. But I was an upside down snorkeler trying to balance against wave pressure generated by Tropical Storm Ivo.

Now, that’s another thing I should mention. Amidst all the exciting build-up to this trip I noticed there was a storm advisory starting Saturday night and lasting until Tuesday. Tropical Storm Ivo’s wrath was supposed to land on SoCal beaches Saturday night and cause large waves, very strong rip currents, etc. They even warned that folks may want to avoid getting in the water.

Yet, Sunday was a great day for snorkeling at the Shores, at least in terms of wave height. The waves were so minimal that it was virtually impossible to get tossed while going in or out. This is in contrast to some years at the Shores where getting out past the wave crests was an athletic challenge for the brave.

So where was Ivo? Well, it was in the wave motion under the water, where that current did push and pull quite a bit, especially in the underwater park. And, apparently, in temperature too. Word on the waves was that a low current of cold water (I could feel this distinctly when diving down) scared all the sharks away as they like to give birth in warm water.

On my last trip back to the beach I didn’t see a new creature, but I observed a new behavior. I spotted a trio of round stingrays playing in the shallow glow of afternoon sun warbles. But were they playing, or doing something else?

At 4pm we packed it up and started for home. We stopped at Rockin’ Baja Lobster in Oceanside for the second year in a row.

Another tidbit: Thanks to the underwater animals guide by the restrooms, I realized that the “juvenile leopard shark” I saw among the rocks in 2017 was actually a horn shark. So I guess I’ve swum with five different types of sharks in the wild now (leopard, horn, nurse, bull, and lemon…sounds like a Fleet Foxes song).