Costumes? Yeah, I don’t do that either

November 1, 2010November 4, 2010Uncategorized by Andrew1 Comment on Costumes? Yeah, I don’t do that either

A few weeks ago Layla Kilolu (a fellow Pepperdine MBA student) invited Sam and I to a show Layla was going to perform in.  A week before the show she reminded us that it was a costume show as it was on Halloween weekend.

I don’t do costumes.  I don’t have any ethical/political reservations against it or anything of that nature; I just don’t feel comfortable dressing up in general, let alone pretending to be someone else.  Last year I felt really bad because I resisted getting a costume long enough to show up to our friend’s party without one.  We didn’t get invited back this year and I hope that isn’t why.  Either way, my Halloween grade isn’t traditionally good in the “participation points” column.  Now I had to come up with something for this concert. What was originally going to be just a fun thing to do on a Friday night was now a big black hole in the schedule getting closer and closer.  I didn’t want to let Sam down again (being a fashion designer she has plenty of ideas and accessories to create a good costume for herself).  She had some ideas for me, but I shot them down for various reasons (like, not wanting to wear a suit all night in a hot bar).  Then, she saw something blindingly obvious that neither of us had thought of before…

I work at a dental lab.  I have access to every dental device imaginable.  So, I just wore my lab coat, printed out a “Dr.” to stick on my name tag and filled my pockets with pics, lights, retainers, mirrors, etc.  It wasn’t the best “doctor” Halloween costume you ever saw – but it was enough to squeak by – especially since the bar was really dark to begin with.  Sam went with a masquerade ball theme costume. 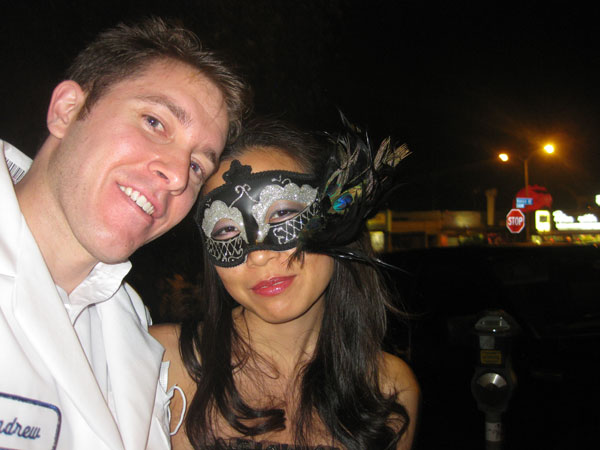 Yes, I realize I’m lucky to have someone who puts up with all my little social phobias, etc.  Two weeks ago we’d been invited to a birthday party at SkyBar.  Skybar is one of those words you hear on television shows called TMZ after other words like “paris” and “lohan.”  It was an extremely awkward place for me.  It happened to start sprinkling that night and skybar is half outdoors – so everyone packed into the little area up the steps with a ceiling.  However, the entire “bar” is outdoors, so smoking was allowed (yuck!). We were packed in and couldn’t move.  The “music” was too loud to talk with anyone about anything (or maybe it’s just my damaged ears from too much loud music in my former life as a wannabe musician).  I don’t know why anyone thinks that sort of thing is a good time – but clearly my opinion is a minority one.

But, perhaps for “normal” people (no creative drive), this is akin to entertainment (tv, movies, etc.); something to occupy the mind after a day of work.  And, yes, I understand the concept of drawing women and men together with alcohol, shaking and seeing what happens.  However, I don’t drink and I’m not on the prowl – so why do I need to be rubbing up (involuntarily!) against strange women late at night?

I knew that this concert would not be a repeat performance of Skybar as it was taking place in a less “posh” bar.  We were supposed to be on the guest list, but somehow Sam’s name didn’t show up.  The concert started an hour late (although, I guess all concerts start late, right? every one I’ve ever seen has).  The first act consisted of a gay man (he made it an issue, not me) imitating Scissor Sisters, but with more references to his own genitalia than I was comfortable with.  I kept wondering if being uncomfortable made me  homophobic, until I reminded myself that when I see female singers they don’t spend the whole show (except maybe Courtney Love) flashing their breasts and asking the audience to touch them… It just isn’t very professional.  But maybe it was all an act… it was a costume event for Halloween after all.

At roughly 10pm Layla came on the stage.  She had a good backing band, with everyone in costume.  I think her lead guitar (?) went as the banana from the PBJ time song.  The drummer (a woman, which is rare in rock, just ask Patty Schemel) was dressed as a pixie and was playing about as fast and energetically as her fairy wings might have beat if they were real.  Layla was wearing a Sailor Moon costume.  Unfortunately, for the duration of her performance either we weren’t standing in the right spot – or the levels for her mic needed to be adjusted as we couldn’t hear her over the bass.  She also didn’t play the two songs that I (and I think Sam too) really like.  I remember saying into Sam’s ear during the sound check before Layla came on “how can they do a sound check with the house system up so loud?!”  Apparently they can’t.  It sounded like Layla was singing well, and her band was playing well – but the sound coming out at us was muddy because of the overwhelming bass level. 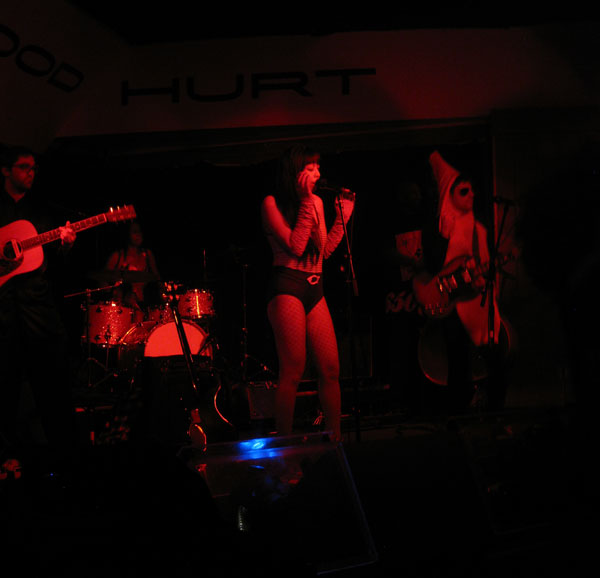 After her set we decided to leave as it was already late (to us).  The majority of the rest of the weekend was spent on fun stuff for our strategy class.   Well, if you consider business forecasting and evaluating fun stuff.  I don’t.

One thought on “Costumes? Yeah, I don’t do that either”