Pepperdine is doing their best to chew up their MBA students before spitting them out in a few months.  I now only get over 5 hours of sleep on days that start with S.  I still managed to set aside two hours to visit the Art Walk.

Anyone who pays anything to park downtown simply doesn’t know their way around or is afraid to walk a few blocks to get to their destination.  I found free parking (some meters are free after 4pm downtown) near main and 7th.  I’d never walked east on Main to get to the Walk and I found three new galleries on my way.  The first two were on 7th street.  The second was some kind of lame skateboard culture shop with some art on the wall to qualify as a gallery.  The second was the Zzyzx Gallery of Nautral Science.  The shop is very small compared to how they represent themselves online.  I appreciated the emphasis on the art involved in scientific museum pieces, something usually overlooked in science and history museums. 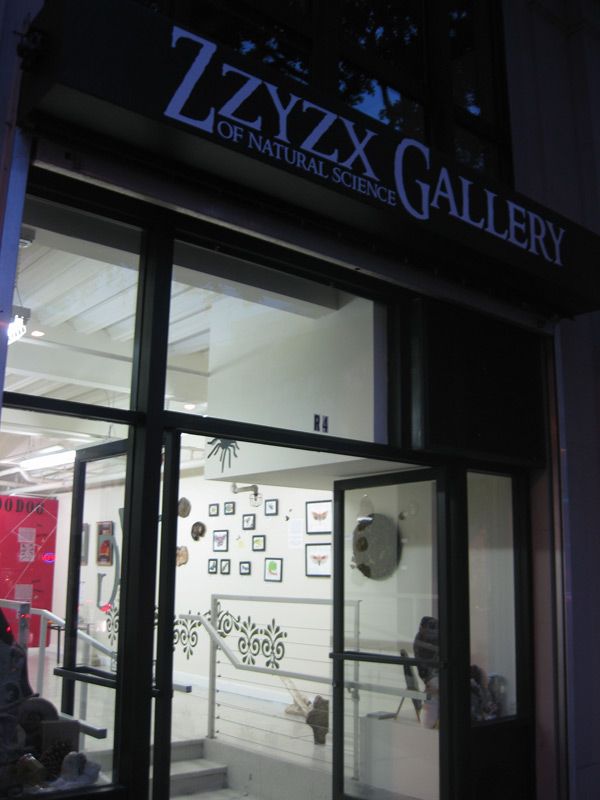 The gallery had many nice detailed drawings by Rachel Diaz-Bastin:

Just half a block east on Main was the Not for Sale gallery.

The gallery was sort of a tiny homage to pop art with a few real pieces, although it wasn’t clear if they were for sale or not.  A lone proprietor sat in the middle of the tiny gallery at a schoolhouse desk brandishing a wooden baseball bat. (he was in the back when the photo below was taken – but you can see the desk)  Note the giant Kaws sculpture and the Banksy street signs in the back. 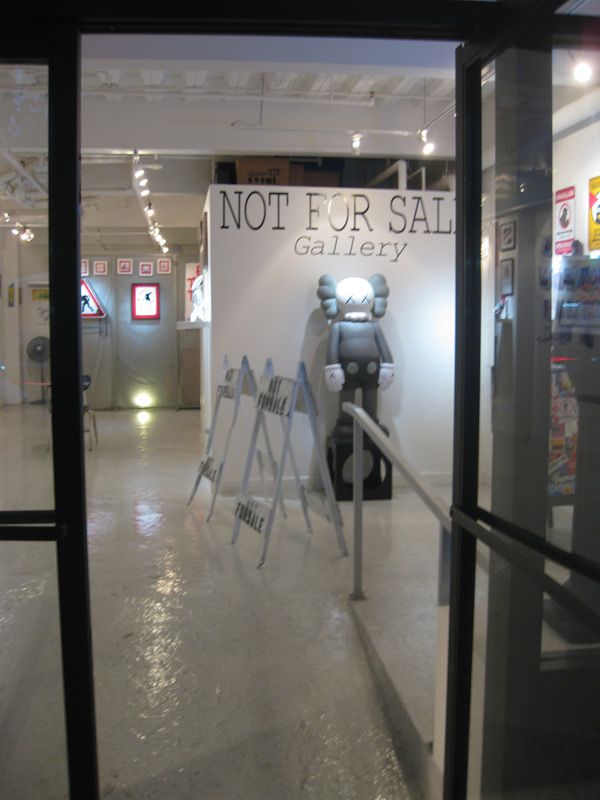 Near the window was this Jesus Relics vending machine. 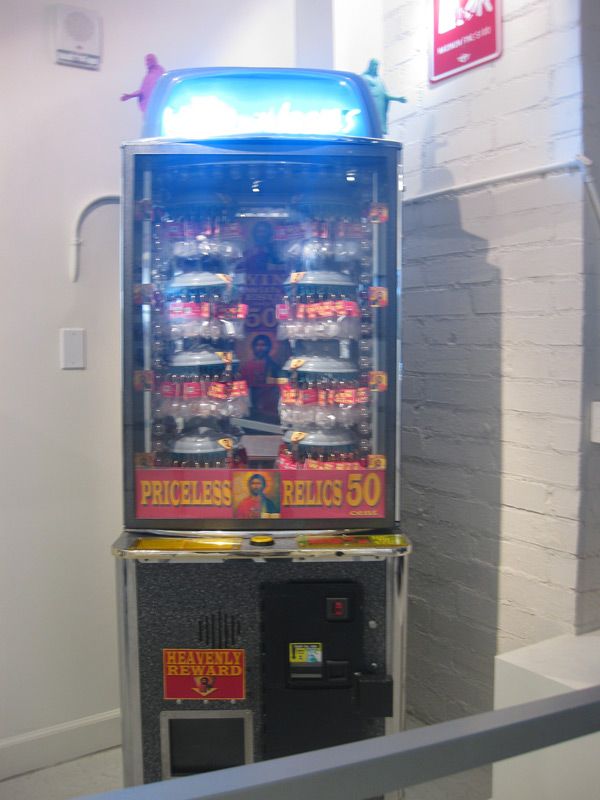 A few blocks more and I was back across from the old Regent in the art fair (still back to being free admittance). 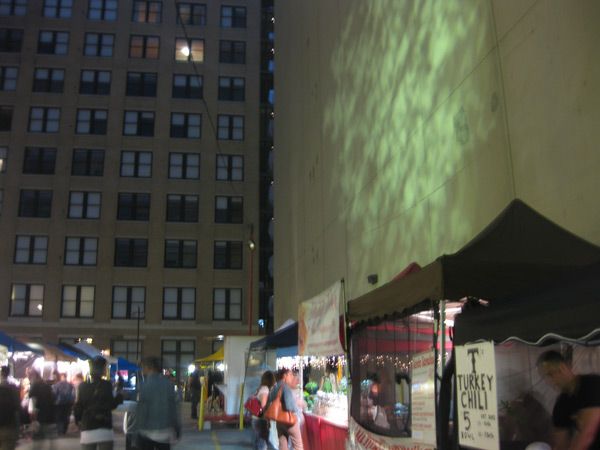 Kit Kan was selling interesting plant arrangements under the name Branch of Life LA.  I actually wanted to buy one of the “shady” arrangements – but I didn’t want to carry around a delicate glass+living thing all night.  He said he’ll be at the Melrose Trading Post the next two sundays – so I’ll try to catch him there. 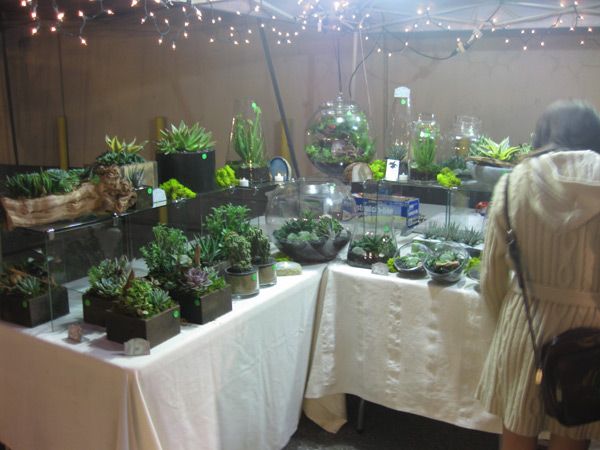 My dinner was the next-door fries+philly cheese steak booth (although it still pisses me off that these people don’t put green peppers in their cheese steaks…who the hell leaves out the green peppers?). They should have paid me for the free advertising as in the next five minutes everybody on the street was asking where to get what I was eating.  Of course, eating wasn’t a problem on the Art Walk, there are more food trucks downtown now than cockroaches at the Orpheum, and more parking lots reserved for food trucks than cars. 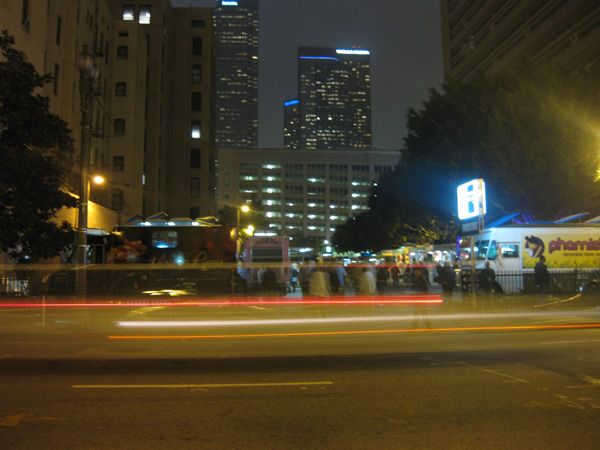 Across the street on Main from one of the food truck lots was this band that always turns up on the Art Walk somewhere. 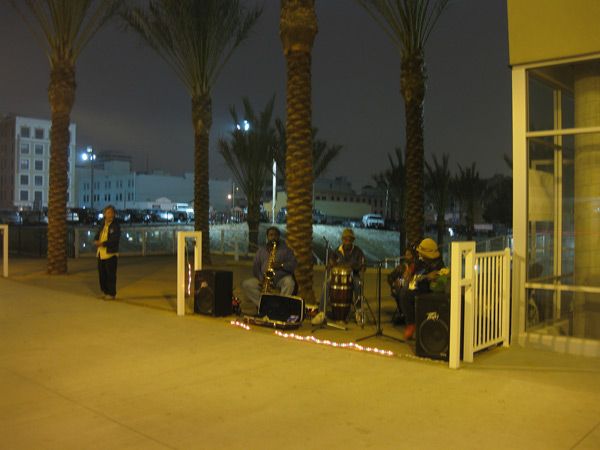 A brand new gallery opened (or perhaps it was last time when I didn’t attend) for the art magazine/web site bluecanvas. 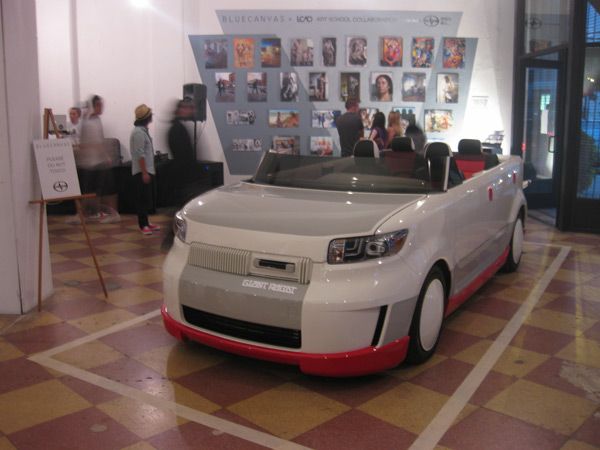 The art was surprisingly good, especially the pieces on this wall… 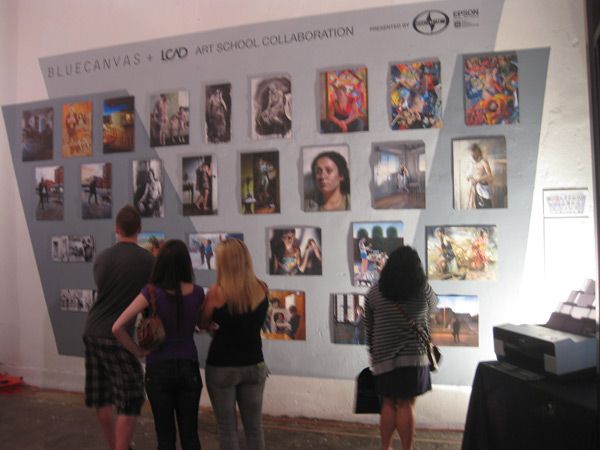 They were actually all good pieces, but my favorites are these two: Brooke Shaden also had about six pieces up.  she is a very good photographer+digital photo manipulation artist.  I first heard of her in March when I was supposed to share gallery space with her at Gallery Godo.  I was very disappointed that I didn’t get to show with her. Another artist had this wall sized piece: 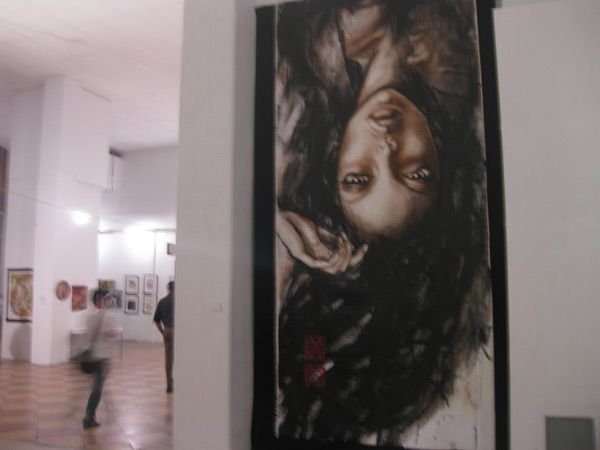 Elsewhere (close to the thankfully closed Phyllis Stein gallery) on 5th was this gallery picking up where the Stein left off.  Apparently ugly wallpaper nailed haphazardly to the wall is a work of art. 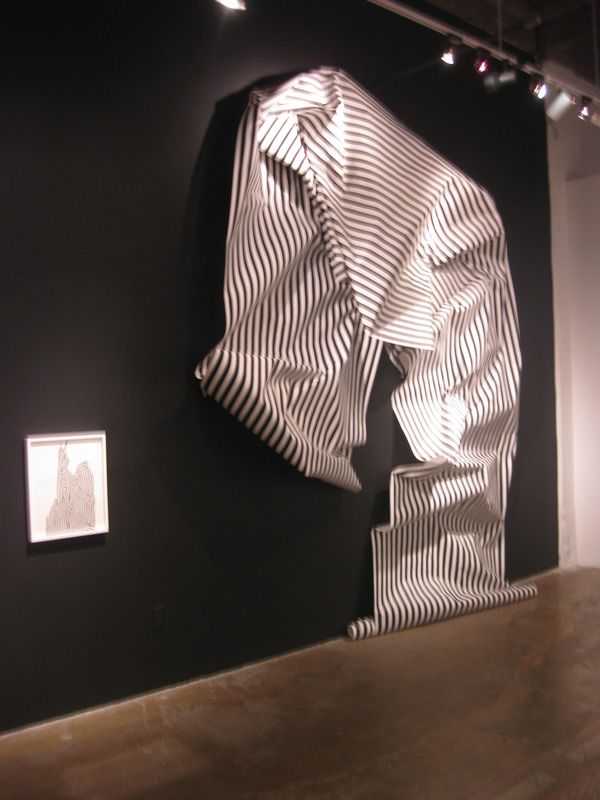 I didn’t even take any photos in Bang Gallery.  The art has gotten worse.  There was a room labelled as “!!!” (sorry idiot, there is already a band by that name…didn’t you know?) – this was an electronic act, but it was essentially a recreation of a project I did in an electronic arts class in 2000 using a drum machine to control musical notes/passages in coordination with projected images.  Of course, when WE did it we added colored (with a separate projector) fog, projected everything onto a sheet that moved with the music (thanks to fans behind it coordinated with the computer) and a theremin type of sensing device that changed the music based on who was walking in front and how close they got.

This piece at bang was just some Phish fan with a electronic drum set and a projector hooked up to a laptop.  “oooh, it shows an explosion when you hit the Tom – cooooool!”

As usual the two galleries on the Walk with the best showing (although Blue Canvas is certainly giving them some strong competition) had new work up.

The Temple of Visions was actually kind of dissapointing.  There were some pieces I enjoyed by Ryan Johnson and a few others, but there were less standouts than in the past – and much less variety (no Zar paintings for example).  At least they got rid of the clothing racks idea.

Andrew Gonzalez reminds me a lot of H.R.G.

Next door I revisited the Hive’s Hell vs. Monster Mash show.

Larkin, who does some amazing detail.  I’d really like to talk to this guy some time and ask him just how he makes such teeny tiny strokes with acrylic paint…   Maybe I just need higher quality paint that doesn’t clump up so much…

and here is a slightly higher res photo of the wall I blogged up a few weeks ago – with my painting (the little orange one on the left) just inches away from Chet Zar (the giant one in the center). 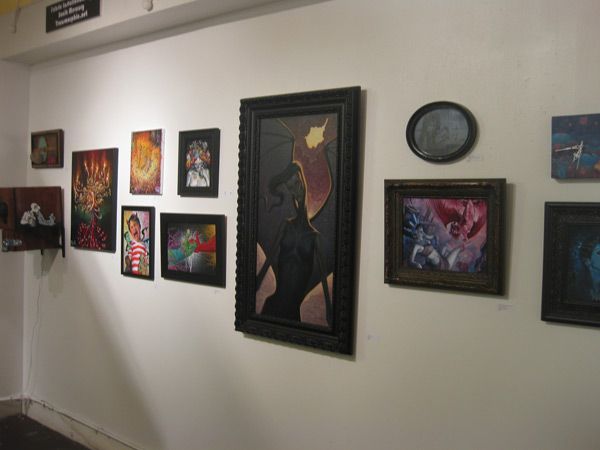 Anna Judd had two paintings that I liked a lot – but I can’t find them on line and failed to take a picture.  I’ve seen her plant based work in other galleries before and it is in some cases better than her figurative work.  Here is a sample:

Below is a painting by Jinx called Your Skull is Red.  I could not find any information about Jinx on line.  There is another artist called Jinx that makes low quality more cartoony stuff, I don’t think these two are related. 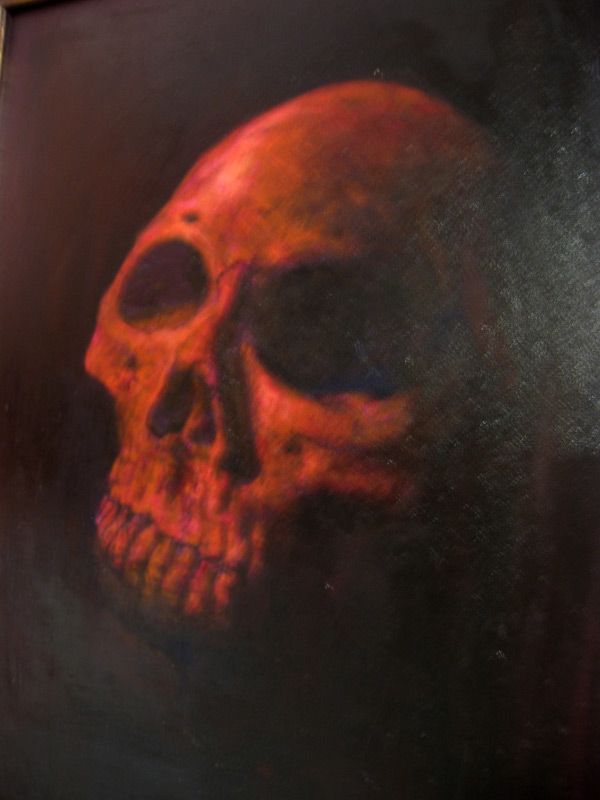 Everyone on the street was talking about how “nobody showed up this month because of that idiot that told everyone it was cancelled”  Oh well, too bad there weren’t throngs of people making it impossible to move about… that really sucks…