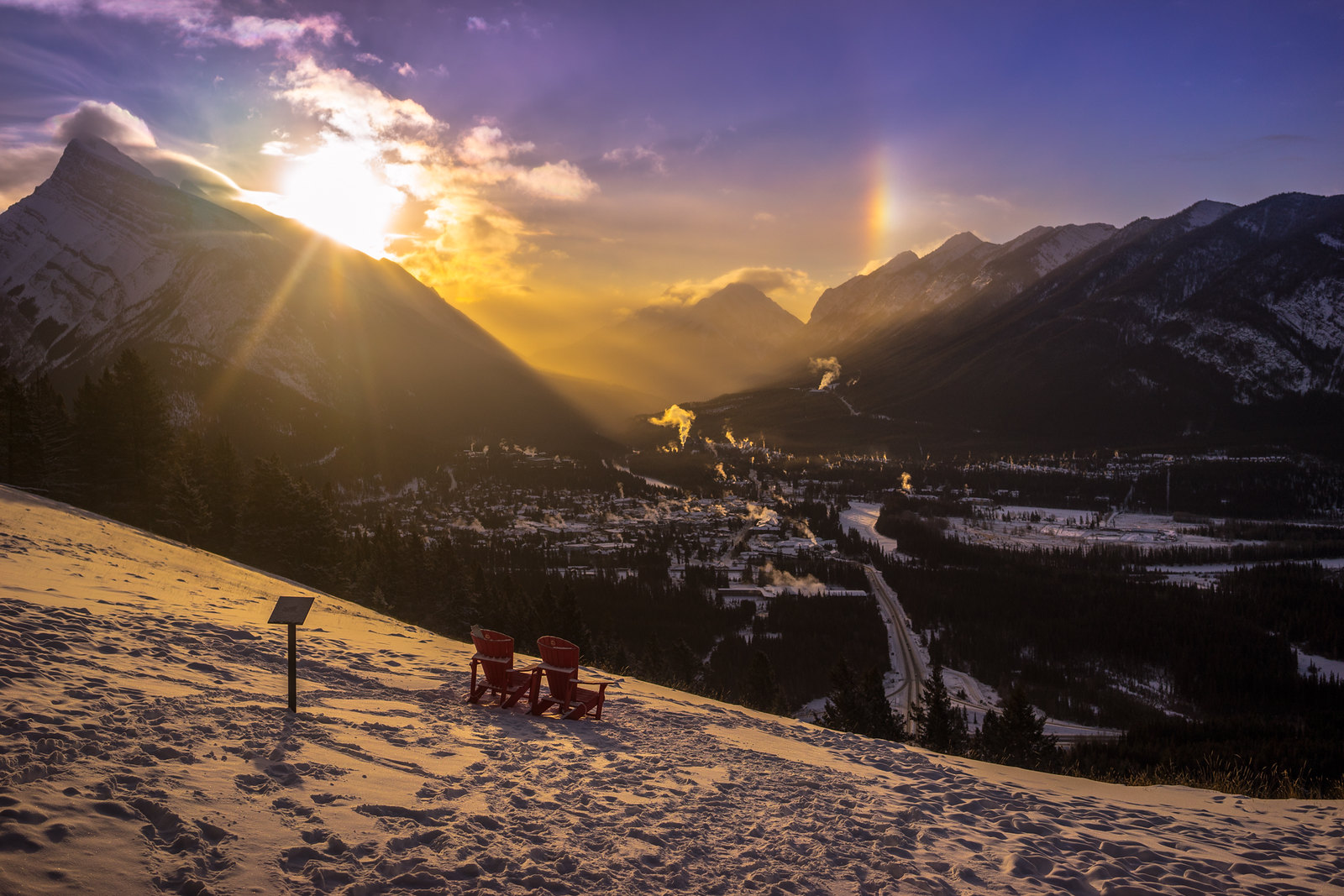 Waking up early on our last morning in Banff and peeking outside the window drapes I noticed the sky was nearly as clear as on our first night. However, unlike that night, the temperature was the lowest ever. -27 is probably the coldest temperature I’ve ever experienced, and boy did I experience it.

I decided to try and photograph the sunrise not from Vermillion Lake, but up on the hill at the Norquay lookout. On the way up the hill, a delivery truck had already slid into the berm. An ominous sign, but I kept on.

Up at the lookout, I set up my camera on the tripod and waited as frost started to cover my nose. As the light kept changing over the back of the mountains in front of me I’d take another shot.

Every five minutes or so I would take another photo, an eternity between them in the unbelievable cold. When I would wipe my nose on my glove I didn’t notice the usual liquid (like every other day) but ice crystals breaking off instead. I wanted to google signs of frostbite, but that would mean taking off my gloves, an even worse idea.

But dangit I had to get this shot, it was the best chance I’d had all week. So, I waited in agony as the sun slowly peppered the neighboring slopes with orange but still hid from mine.

Watching a sunrise is normally a peaceful thing, sipping a momosa in your PJs from a hotel balcony in some tropical spot. An endothermic thing, energizing your body to start the day as the rest of your little section of the world does.

This wasn’t that. I mean, it was beautiful as most things in the Rockies are, but it was a completely exothermic experience, each minute numbing my body more. I would do jumping jacks in the snow (probably to the jeers of folks watching in their warm-ish vehicles from the parking berm above me) to keep blood flowing, but then realize keeping my gloved hands out of my pockets only made them freeze faster.

Over time, my decisions became slower and more irrational. While I considered tactics to keep warm few other brave souls would occasionally stumble down from the parking berm, take a few pictures, and say “Fuck, it’s cold!” and retreat to the safety of their trucks.

Either fearless or stupid, I stayed out there. For a full hour I stood in the snow on the mountain. The sun finally turned the snow gold around 9:45am. However, what minute variations in temperature the sun provided were of little use. As I picked up the camera off the tripod and started to take shots I noticed danger creeping up fast. The first sign was that my breath started to cover the surfaces of the camera and instantly turn to frost. The focus ring became almost immovable. Not that I could see through the blurry frost on the viewfinder anyway. Or maybe the focus ring worked, but I couldn’t feel my fingers to turn it. “Holy crap, I can’t feel my fingers!” The siren finally broke through the clutter of excuses in my brain to stay out to get the right shots.

I stumbled, feet numb long ago, up the little hill and back to the car, abandoning my quest for the perfect sunrise shot just as it came into reach. Being able to hold onto other things for the rest of my life (not to mention walk) became paramount to getting a couple random favorites from strangers on Flickr and likes from a few friends on facebook.

No. It wasn’t worth one minute more in -27 degrees. Inside the Chevy I waited for my hands and feet to warm up enough for me to drive back down the hill, breath still visible inside the car.

At the bottom, Sam was already packing up and getting ready to check out.

On the way to Calgary, we stopped to explore Elbow Falls only long enough to notice our fingers go numb and then run back to the car.