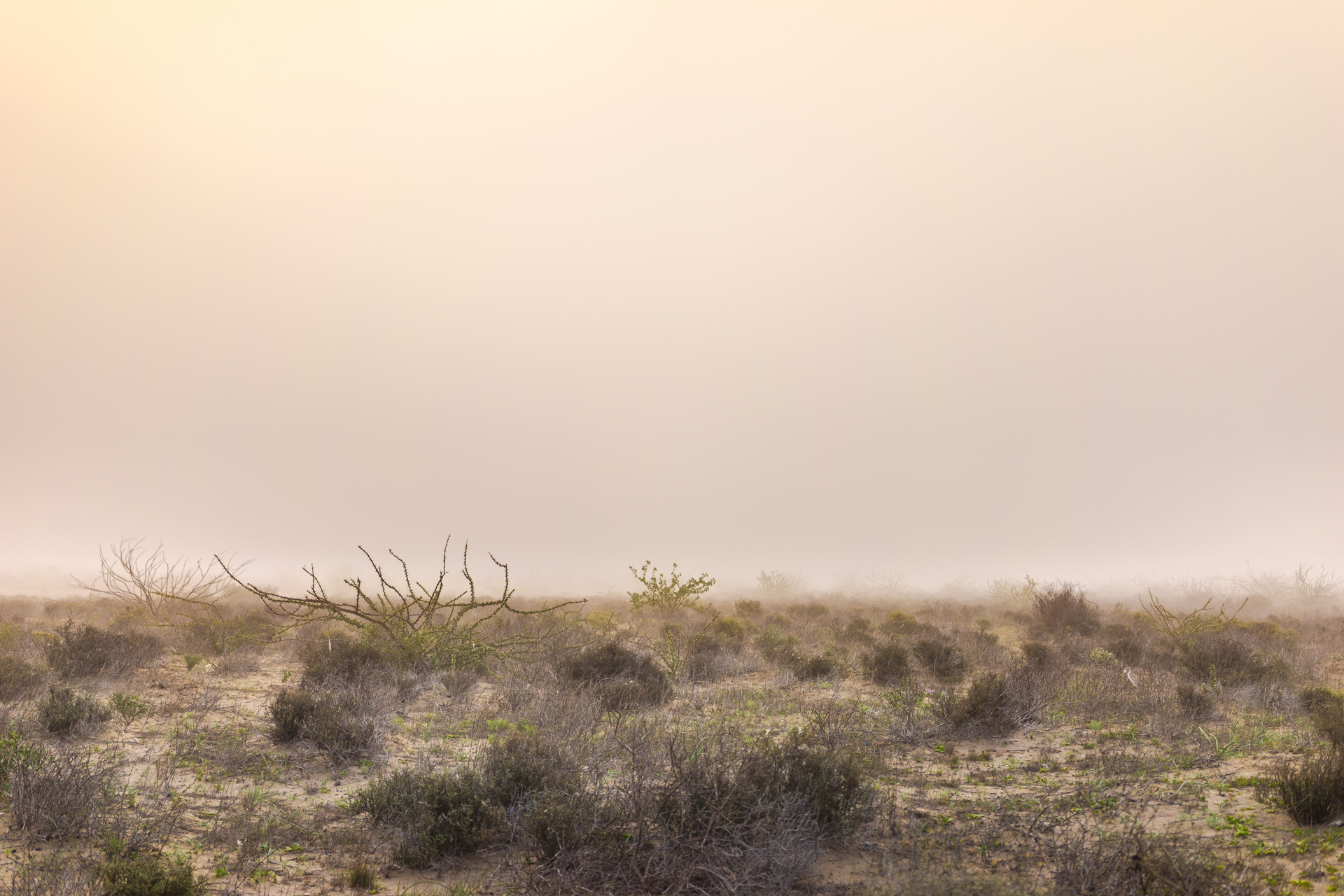 February 2, 2017July 13, 2019Uncategorized by AndrewLeave a Comment on The Lagoon 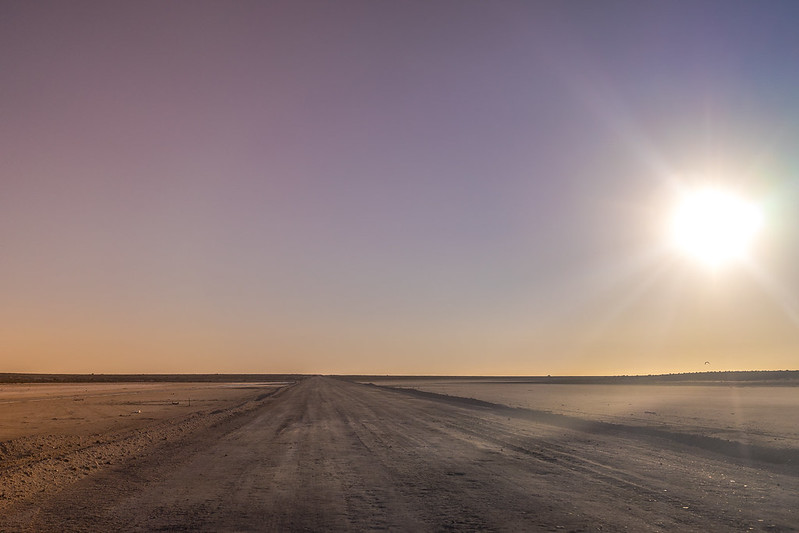 Our first night at the Lagoon was broken by the camp’s dogs howling at the mountains until 3am. We ate homemade potato cakes with salsa for breakfast while Jorge told us the dogs were barking at coyotes, which come down from the mountains to try and steal food from the camp (and eat birds, I suppose?). Captain Daniel from “Antoniosecotours”  got us quickly out to the whales and we had more than a few curious ones in the morning checking out the boat from a few meters away, but none close enough to touch. We ate lunch on a deserted beach then went back in. Before long I had run my hand along the dorsal line of a baby gray whale (and earned the envy of fellow boaters). 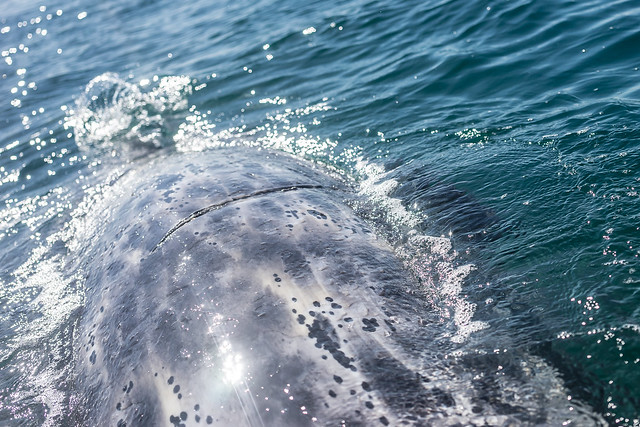 Daniel also brought us alongside several dolphins which looked at me, whistled to each other, then swerved away in formation.

Here is a video which combines all three days on the water and sources three different cameras (gopro, cell phone, and camera).

Back at Pacheco’s Camp we were joined by Frank and Toni, a retired couple from Vancouver that had driven their van all the way down the coast. Happy hour featured a fresh tomato bisque-like dip (this was my favorite dip). Dinner that night was steak (much better than the tough turf from two days prior) and grilled veggies. Still no margaritas, though, and back at our cabana, the hot water pipe burst in the wall while Sam was taking her shower. Jorge inspected and informed us that a new pipe could be installed tomorrow. Having not taken a shower in days at this point I headed to the common shower in the middle of the camp, which was plenty hot since so few were using it (I believe the camp serves twelve guests at capacity).

Our second breakfast was Mexican scrambled eggs served with great fresh flour tortillas and salsa. Outside we met Captain Ranulfo, son of Pacheco (the first man to touch a gray whale on the lagoon without intention to kill). Ranulfo’s 23-foot boat was a bit smaller both in dimensions and engine power than Daniel’s. However, we hoped his deep knowledge of the subject matter and closer proximity to the water surface would give us a more intimate encounter than the first day.

We soon learned that our new captain had a more relaxed approach than Daniel, we would spot a whale or two, saunter up within 50 feet and wait for them to come to us. Most of the time this resulted in a disappearing act. Some of the time it resulted in curious whales swimming under the boat. Once, a group of curious males swam up, lifted the boat, then flopped to the side and stuck their nose up, letting Sam touch it. It was the last touch anyone would get for the remainder of the trip, and the closest the whales would come.

My inner dialogue vacillated between frustration that our new captain wasn’t as proactive as the other and the reminder that it was a privilege to even get to be here, sidling up alongside 45-foot long whales in a 23-foot panga on a clear day in Mexico. Still, the rush of the first day hung over the next two, though the enthusiasm of the Canadians made it easier to bear since they weren’t around for all the previous excitement. In fact, they seemed content not getting to touch the whales at all, which is likely the attitude one should maintain to have a good time at the lagoon. Just seeing these majestic animals turn over and look at you from a few feet away is an experience only a few thousand people in the entire world have had, and with the climate heating up the lagoon may eventually no longer be suitable for these whales that normally prefer cooler waters. Of course, this is partially our own fault for coming (unbeknownst to us at booking) before the “true” start to the whale watching season. Perhaps we should feel lucky we got to see them up close at all.

Who else gets to take a selfie like this?

But then they do advertise it as a once in a lifetime opportunity to touch (and even kiss) whales, after all. Before we decided to go we saw countless videos like this:

That’s the draw and the legend of this place. And Pacheco’s was the original company to offer it, so the cognitive dissonance made me feel a bit like a non-racist Republican must be in the new Bannon era.

But we were on vacation, after all, isn’t that good enough? One thing marvelous about the camp was the absence of any news. It wasn’t just a vacation from work, but from our terrifying new president. At least if Don Jong-un started WWIII we’d only see it as a bright glow to the north, not the panicked few minutes of sirens and then instant death we’d experience in Los Angeles. We learned about the Muslim ban days later, mostly by friends directly affected by it (Yes, Virginia, there are non-terrorist Muslims). Not hearing for a few days about how the orange clown was embarrassing our home country was glorious. Ironically because of the reflection of the sun on the water out on the lagoon, sunglasses, and inaccurate coverage of sunblock we ended up looking a bit like the son-of-orangutan by the end of it, white around the eyes and darker everywhere else.

Back at camp, the tide was lower than the previous day so we hopped overboard and walked the last quarter mile. Through a few inches of retreating tide, we spied hermit crabs on the move. 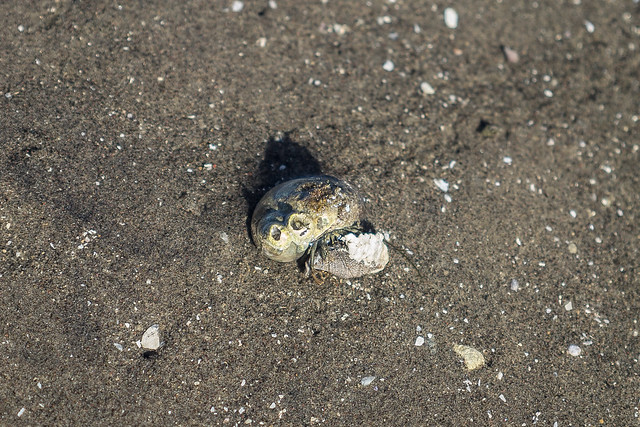 The happy hour finally had margaritas, so I had two (Sam had one) while eating chips and tuna salsa. We drunkenly swapped travel stories (and later horrific predictions for the next 4 years of a trump presidency) with the other two guests until time for dinner.

Later, finally, a hot shower. All two minutes of it, anyway. The pipe and the heater were fixed but only allowed for a few minutes of heat. Never ascertained whether something else still needed fixing or that was the intention all along.

In the morning we reconvened for a breakfast of egg tortas and salsa before joining Ranulfo on the boat again. On this day, our last, a heavy morning fog fell over the lake making for romantic views across the water of sea and sky merging in a pinkish-gray middle. 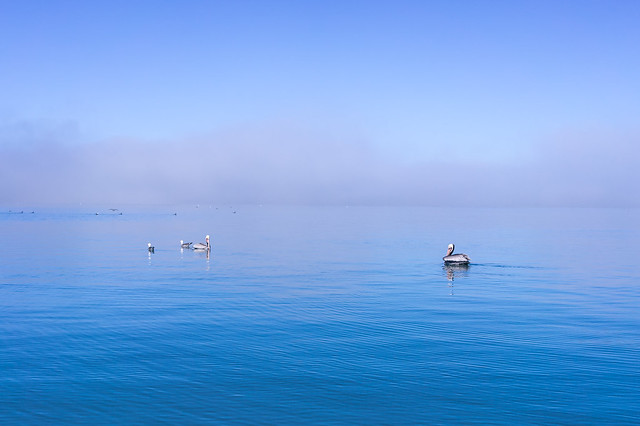 Eventually, the sun burned off the fog, but whales must hate fog as we didn’t see as many as before and only two or three came close to the boat all day. I was more disappointed as I put my camera in its waterproof bag to take underwater photos. Unlike the last two days, the water was no longer glassy, but gray and thick. The few times the whales did come close the water was so dark and muddy the camera couldn’t focus properly. The photos up on Flickr are the few remaining in focus out of thousands of attempts. However, sometimes this moody atmosphere leads to something aesthetically interesting. This photo is the bottom of the big mamma and baby: 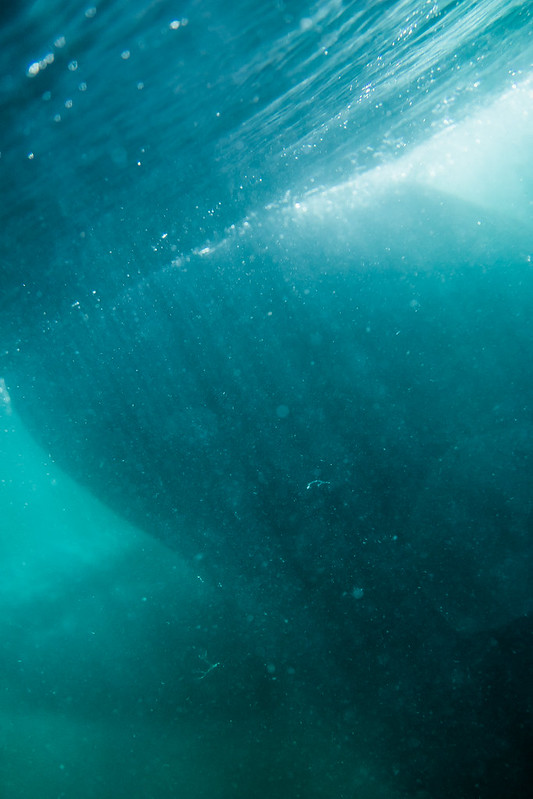 We ate lunch on a sandy beach where the breakers from the Pacific hit the entrance to the lagoon. 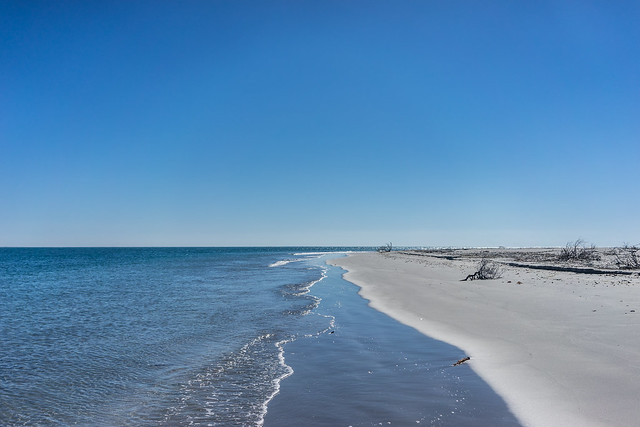 En route to the bathroom (a tall dune) we found that the dunes hid bleached whale bones and other treasures. I found one of the ocean giants’ massive vertebra turned nearly to ash after years in the sun. 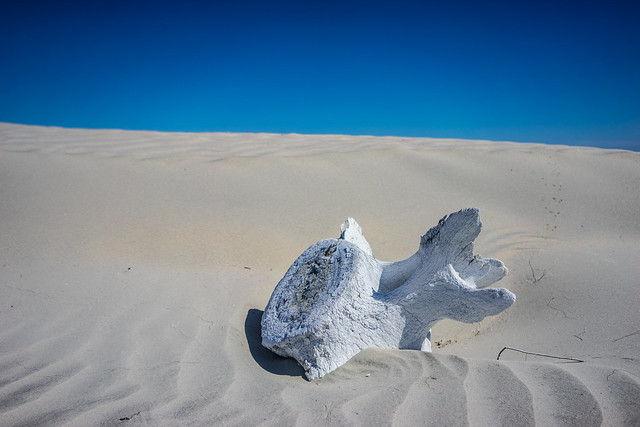 Little footprints on the dune leading away from it were hard to describe to our captain but he eventually told us they’re from kangaroo rats. Sadly we didn’t see any of those hopping around in the flesh. Walking back to the beach I found a bird sternum and a horseshoe skeleton in the sand. Sam found a few perfect sand dollars.

In the afternoon the whales liked us even less, diving away long before we could get close. Back at camp, it was time to chug a cerveza, say goodbye to our hosts and new friends, and head to the town of San Ignacio before nightfall.

On the sand road, we passed a hitchhiker with a red American flag t-shirt and decided to pick him up. I thought I recognized him from our camp (and there really isn’t anyone else out there) and, through zero English, we thought he verified this “Si, Pacheco’s, si!”

The hitchhiker and Sam both went to sleep and I drove the hour plus back east to town. When we were almost to San Ignacio I saw a police car at the side of the road with lights flashing. Three officers came out into the road and made us stop. They told the hitchhiker to get out and promptly arrested him. I asked “No hitchhikers? Illegal?” and the officer just said “No problem. Go,” and waved us on. Uh okay… not going to argue with that, but did we just give an axe murderer a ride? We never found out.

In San Ignacio, we checked into Hotel La Huerta, which was surprisingly nice. Actually the nicest place we stayed the whole trip, and coincidentally the cheapest. It had hot water (our stays in Loreto featured lukewarm water), tile floors, ample pillows, its own convenience store, and a night staff that understood English enough to meet our request to tell the noisy neighbors to shut up after ten. 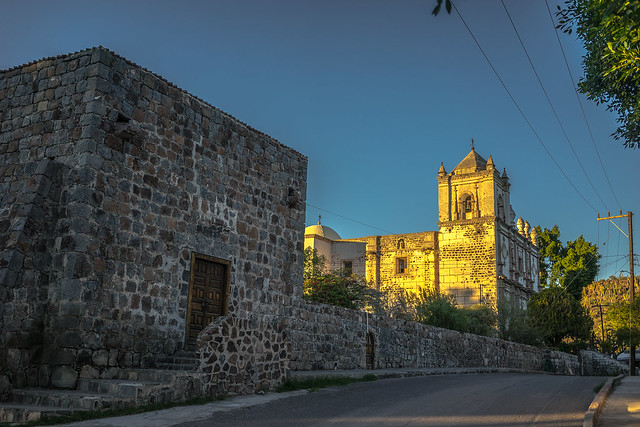 For dinner, we walked up past the mission to the town square. At the northern corner of the mission, a man standing by a shack sold us on his Mexica Sampler plate. It was dirt cheap. And delicious! We got ice cream for dessert and wandered up the street to Rene’s for a margarita. By the time we were done night fell and the whole town was playing volleyball (or watching the match) in the town square.

This was the authentic little Mexican town experience we expected in Loreto and couldn’t find.