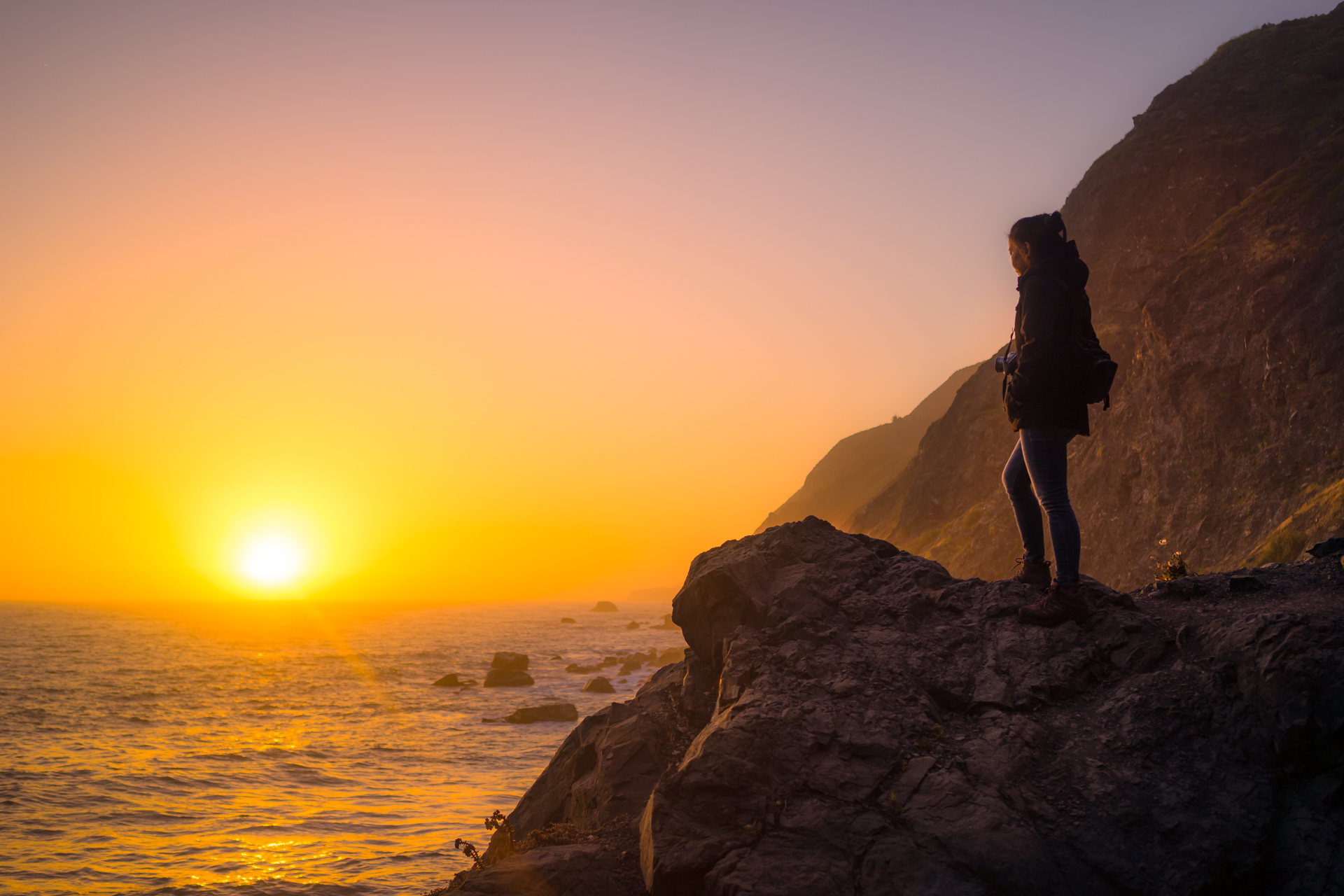 On Friday we made our way northwest to San Francisco for a late lunch on the Wharf. Because we drove up in Sam’s Miata we couldn’t leave San Francisco without a trip down Lombard Street. From there we drove over the Golden Gate and continued to the Muir Overlook.

We did a swift U-turn to begin our journey south along the Pacific Coast Highway. We stopped at the Marin Headlands vistas first.

My cousin and his wife retired to Santa Cruz not too long ago. We’d made loose plans on social media to meet them on this trip, but when the day came we couldn’t reach them. We visited Natural Bridge State Beach instead.

Apparently, rich kids in Santa Cruz congregate on the beach on Friday nights to annoy wildlife and other humans. I wonder what those kids would do with themselves if they were stuck in the Mid-Ohio Valley for a weekend. Probably not stand on the rocks in front of the lifeguard, scare seagulls from their nests, smoke pot, and drink beer.

We felt like old-timers complaining about the youngsters, but I doubt any medical marijuana cards are issued to 16-year-olds, even in Santa Cruz. Or medical beer cards for that matter.  At least in my day, we tried to hide what we were doing, maybe because our parents couldn’t (or wouldn’t) bail us out if we got caught. Joints were (or, um, if this is mom reading: weren’t!) smoked in parked cars at midnight on dirt roads leading into the woods, not in front of tourists at sunset. The children on the rocks were afflicted with a clear and crippling case of affluenza.

Another hour south and we reached our hotel in Monterey, which had its own fireplace and a free bottle of wine. Apparently, we’d booked so many rooms on Expedia in our last few years of travel they felt it was time to reward us.

Pro-tip: when designing customer reward programs it’s always useful to send your customers a survey about what they really want. Neither of us really drink red wine. Whoever invites us to the next dinner party will have to let us know afterward if Expedia wine is any good!

Saturday required some maneuvering. The pacific coast highway closed a few months back after the heavy winter rains washed a bridge out. We spent a few hours at Point Lobos looking at sleeping seals, bird islands, and squirming tide-pool creatures before going down further.

We didn’t make it to the lighthouse by the end of the road. We started to see that the area around the lighthouse held no villages to offer succor for our grumbling tummies. We turned back to visit Carmel-by-the-Sea and eat some great (but pricey) mexican food at el Pescadero.

After lunch, we had to make the long drive around the PCH closure by going east then down the 101 and back west again to San Simeon. When we left Carmel the temperature was in the high 60s with a sweet ocean breeze. We put the top down, of course. By the time we crossed through the farmland of Carmel Valley and blasted between the yellow hills of King City it was over a hundred degrees. Even at a matching velocity, a convertible offers no relief. We had to pull off at the first rest stop and put the top up until we could reach the coast again.

We turned off the 101 and drove through the hills of San Simeon. We went to the Hearst Castle visitors area and discovered the entire castle rented out for the evening by a private party. We put the top back down and drove by the ocean to the nearby elephant seal boardwalk.

After listening to those giant sea dogs burp and fart and scratch and fight for a while we went further up the PCH to point where the road closed northbound. This time we drove all the way up to the literal closure signs at Ragged Point.

If you can’t beat em’, join em’; so we turned in and had some chowder at the restaurant. Then we noticed there was a wedding party. And why.

Anticipating a stellar (solar?) sunset, we hiked down the ragged vertical trail through the chapparal to the Ragged Point Beach.

On Sunday, we decided to skip Hearst Castle as it would have delayed us too much. Instead, we walked around Morro Bay for about an hour (including watching sleepy sea otters).

We ended our trip with tacos in Pismo Beach.

From there we followed the road straight home, as straight as one can get on the clogged 101. Although that’s not true either. We detoured briefly through Solvang and around and down to Santa Barbara for ice cream because….why not?