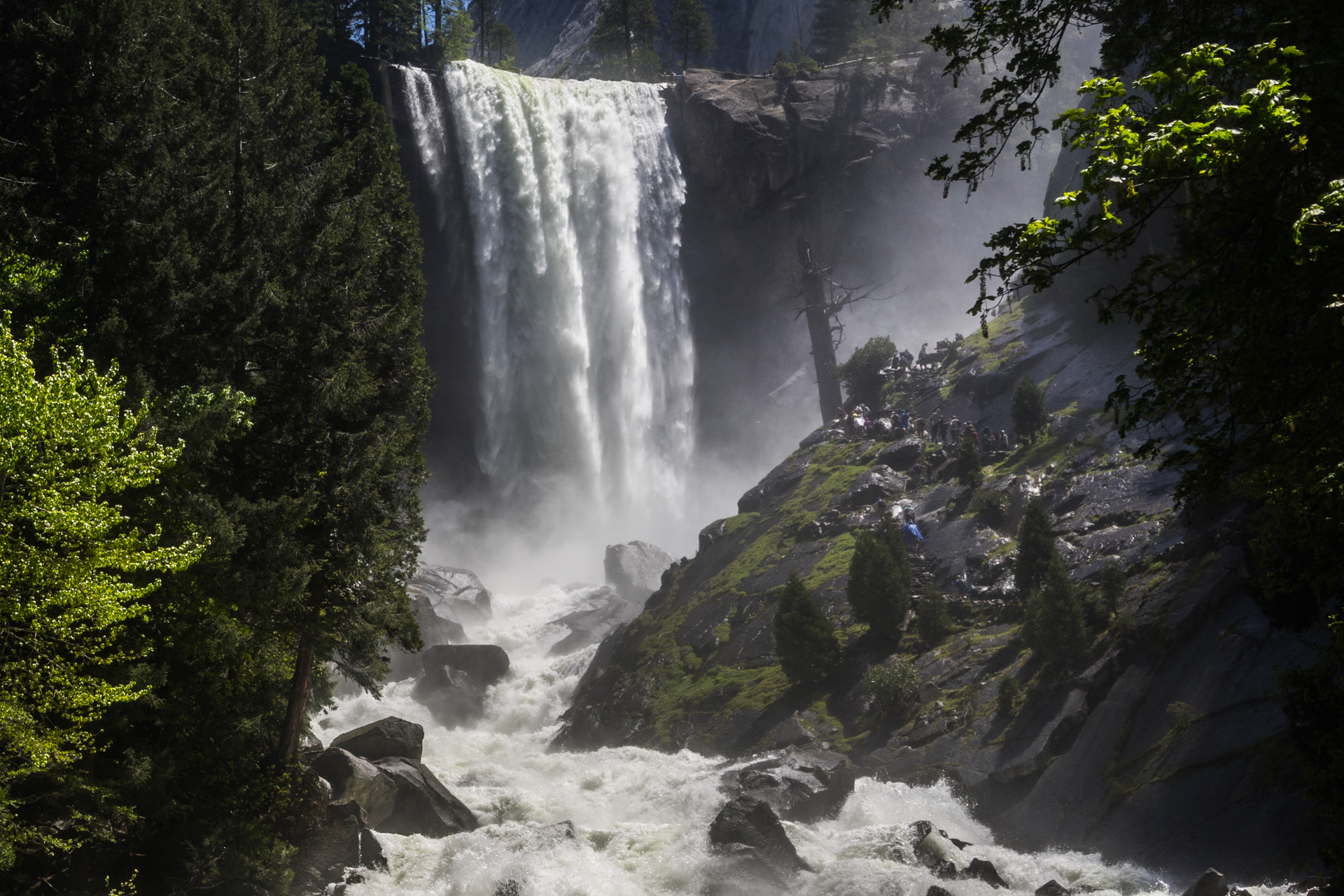 On Memorial day we drove up to Yosemite, arriving in the valley in the early afternoon.

Other than tunnel view (a requirement), our first stop was Brideveil Falls.

Just like Grizzly Falls, Brideveil overflowed with melt from the storms earlier this year. So much so that walking to the viewpoint to take pictures was no different than walking into a rainstorm. We’d later read that water hadn’t flowed like that in the park since the 1960s.

After walking a bit to dry out from Bridalveil’s soaking we went down to the meadow to find our room at the Valley Lodge. We didn’t plan our trip as far in advance as recommended. As such our rooms were piecemealed together from me checking the lodging site every day until an opening (any opening) popped up. As a result, we were stuck with four separate rooms for four nights. The front desk combined two of those nights so we only had to switch rooms once.

However, because we came in so late in the reservations process (people typically reserve at least six months in advance for Yosemite Valley lodging) our first room was probably the worst in the valley. None of the rooms have air conditioning, but our first felt like a sweatbox. On the second floor, it must have been on top of a laundry room (or something) that kept it hot even early in the morning when the rest of the valley floor cooled down to forty degrees. We had to fight our way through a hive of mosquitos every day to get into the room, slamming it shut and splattering any that made it through the gap.

After checking into our sauna room we walked to Lower Yosemite Falls, which is visible from the lodge.

Yosemite Falls’ spray blasted everyone on the viewing bridge. We ran across the bridge and spent the rest of the night wandering through Cook’s Meadow hunting birds and deer with our cameras.

Tuesday we set out for Upper Yosemite Falls, a three and a half-mile hike to the top. It turned out to be incredibly vertical and after the first two miles turns into a sun-drenched rock climb. Sam had to turn around.

I probably would have fainted if Sam hadn’t bought a water bottle with a filter. This allowed me to fill the bottle from the smaller waterfalls on the sides of the trail. Drinking from a glacial waterfall after feeling exhausted and dehydrated is quite a rush.

At the top, the trail flattens out around boulders eventually leading to dangerous viewpoints with only some flimsy metal rails deterring a 2,400-foot fall.  Doesn’t sound like much when you read it like that, but consider that’s a good fifteen seconds at terminal velocity to race the water down. Of course, the cliffs don’t go straight down; halfway they break and run in towards the valley before finding another cliff.

Upper Yosemite Falls is so high that from the bottom you can only see that bottom cliff. For even further perspective consider that Staubachfalls, one of the waterfalls in Lauterbrunnen that so influenced Tolkien’s Rivendell, is only a little more than a third the height of Yosemite. Even Rothbachfalls, Germany’s highest waterfall is still nearly a thousand feet shy of Yosemite Falls. And unlike those other places, I couldn’t leave Yosemite without reaching the top on foot.

From the top, and from some of the other viewpoints, the falls produce an impressive double rainbow (as if the punishing waves of water cascading down the tallest waterfall in America wasn’t amazing enough).

Speaking of punishing; apparently, my old knees aren’t up to a 7+ mile 2,500-foot elevation change hike. After half an hour of hopping down the rocks returning to the valley, my knees began to seize up. The trail coming down seemed to stretch on forever, like the vertigo effect (or dolly zoom, if you’re nasty) in movies where you zoom in on the rocks in the foreground but the end of the trail just gets farther away.  I finally reached the bottom, creaking and moaning like an old robot in need of oil, two and a half hours later.

Tuesday night we checked into our new room in the Alder building, cooled by vents receiving air from the stream behind the building, which was firmly planted in the meadow forest instead of the hustle and bustle of the village proper.

After a well-earned dinner, Sam and I set up in the meadow again to catch the red sunset on half-dome. Deer came again, but the red face never did.

Back in the valley, we treated ourselves to the Mountain Lodge restaurant (good, but not great) before heading to the meadow again. Our patience rewarded, we saw the red sunset rise and cover half dome.

After sunset, I headed to tunnel view alone for a few starlight shots.

Thursday we set out to hike to Nevada falls.

We were turned back by the fierce hail of water from Vernal Falls after ascending the stone steps nearly to the top. After only experiencing the “mist” of the first half of the stairs it became clear that going all the way would soak us through.

It was so wet at the top we would have needed underwater camera housings to not return with broken cameras. We turned back, and a good thing too as my knees were already beginning to hurt again.

We took the easy walk to mirror lake but were a bit disappointed with what we found.

We walked to the other side of the lake, but nowhere did I see an opportunity to take the clear photos of the lake (really a swamp) I’d seen online.

Later we drove to tunnel view for the sunset before stopping in the meadow for some starlight photography before mobs of mosquitos forced us back into the car and off to our room.