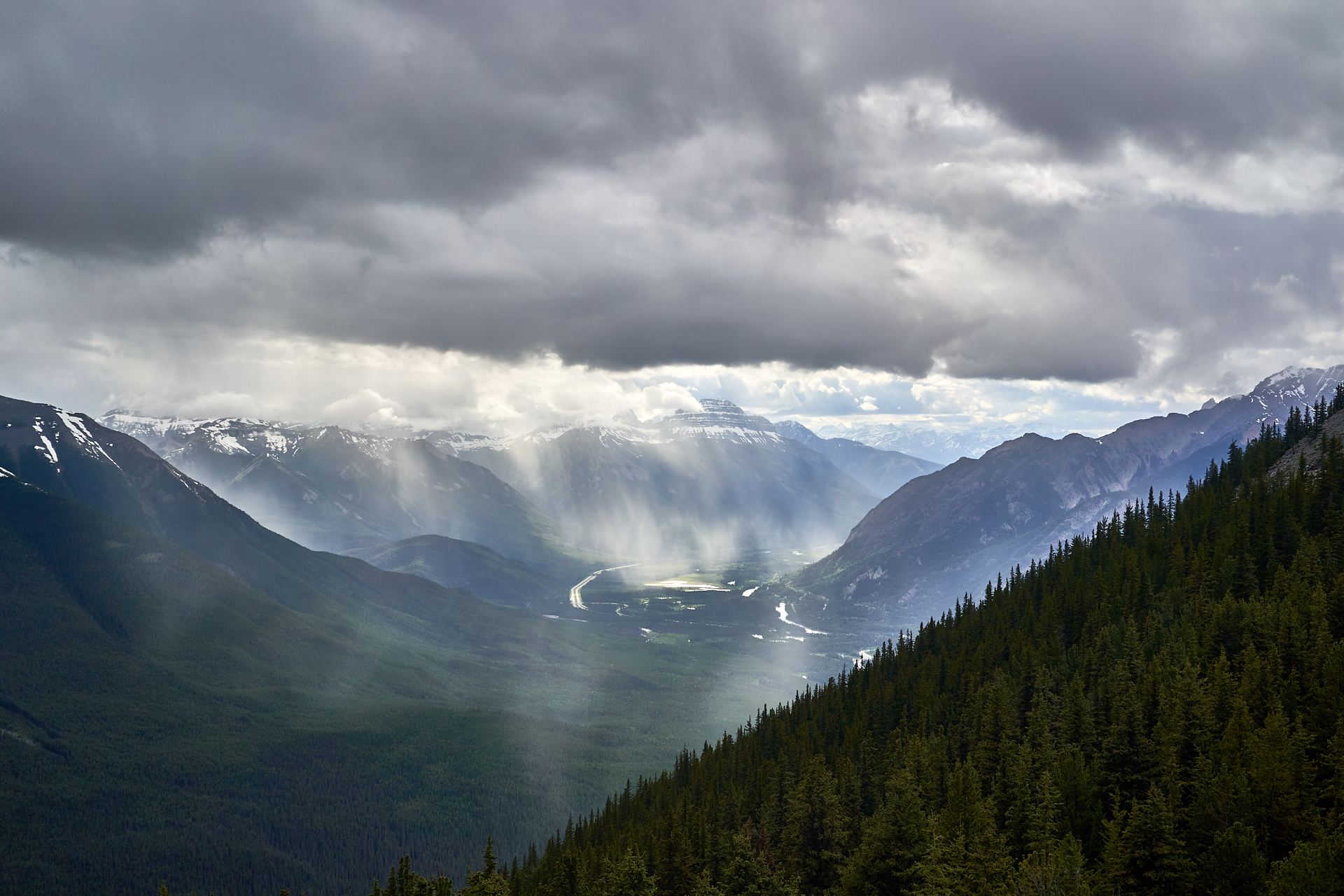 On Wednesday, we returned to Johnston Canyon, which we’d visited on our last trip when the waterfalls were frozen. During the last visit, our GoPro and DSLR both failed when we came to the upper falls viewpoint. In a stirring coincidence that might convince a less-skeptical person of hauntings, ghosts, or astral energy vortexes, the GoPro started corrupting all remaining video files from the trip immediately after we left the same spot. Luckily my new camera survived intact….but only temporarily.

We visited the Vermillion Lakes next, vastly different than during the dramatic winter sunrises we’d seen before (though vastly safer to approach the waters). The mountains behind the town were hidden in fog so we drove up to the viewpoint.

The last time I visited the Banff viewpoint I tried to take sunrise photography and ended up freezing the camera with my own breath in the negative thirty degree cold. This time we spent some time walking around in the fog listening to a large family of marmots warn each other about our presence before popping in and out of their holes. This has to be the place where whack-a-mole was invented.

Also unknown to us last time was the fairy-tale forest behind the viewpoint. A conglomeration of tangled trees rooted in an increasingly vertical hillside and covered in moss and lichen itched for an elf, or something darker, to appear in the drifting mist. These unseen forces beckoned me to worm my way further up through the tall grass into the strange clearings and circles of skeletal black branches. If Sam hadn’t have been there I may have continued on up the hill in search of the perfect photograph and lost my way in the eerie quiet.

We left the forest devoid of animal life and found a family of deer by the railroad tracks below. Further outside of town we saw a trio of antlered elk grazing in the rain.

We traveled on to Lake Minnewanka as the clouds began to break. By the time we’d driven to the other side and come to Two Jack Lake conditions were right to take one of those famous “reflection” photos.

Except that the demons haunting Johnston Canyon caught up with my camera as well. The image stabilization motors began to fire at random and gave the camera (brand new Sony A7III) seizures until the dreaded black “camera error” screen flashed. Photography for the rest of the trip would be a struggle and by the end of the week, the damn thing would simply flash the “error” screen as soon as it booted up.

The next day we visited another place we’d seen before under different circumstances, this time the difference proved more dramatic. We went to Yoho National Park in British Columbia to see what Natural Bridge looks like when you can’t actually stand under the water.

Next, we tried to find Wapta falls, which left us stuck in the snow spinning our wheels in the winter. With no snow to stymie things, life found another way. On the highway down into the canyon, a rock hit our windshield and created a six-inch crack. I’d always seen cracks in other windshields but never been in a car when it received on. The cost of crack repair easily ate up our “free upgrade” to the SUV, so we ended up paying twice as much as we planned for the rental anyway.

As it turns out, the place we got stuck last time wasn’t even the way to the trailhead, it was the way to a viewpoint on the other side of the river from Wapta Falls.

Eventually, we got to the real trail, another muddy run through a cloud of mosquitos that eventually gave way to a winding descent next to the mini-Niagra of Wapta Falls.

Hungry after the hike, we headed to Emerald Lake, a “winter wonderland” in December that proves just as pretty in warmer times (though with a hell of a lot more Chinese tour buses) and had dinner at the restaurant on the Lake.

With a little more time to kill and rain clouds coming up in the distance we followed a hunch and drove out to Takakkaw Falls, easily Canada’s closest version of Yosemite Falls and a stunning omission from everyone’s “what to see in Banff” list.

On our last full day in Canada, we returned to Peyto Lake. In 2016 we attempted to hike up from the viewpoint, stumbling through the snowdrifts and barely avoiding the occasional cross-country skiers splitting the pines. This time we took the same hiking loop and headed off on another hunch onto a dirt trail. The trail soon led to a rocky outcropping with a much better view of the lake than anything we’d seen before.

On our way back to Banff, we stopped at Lake Louise, now infested with more tourists than Times Square.

We wanted to visit the other lake, but found the road closed as it was “full.” Instead, we took the Banff Gondola up the mountain to eat dinner at the buffet.