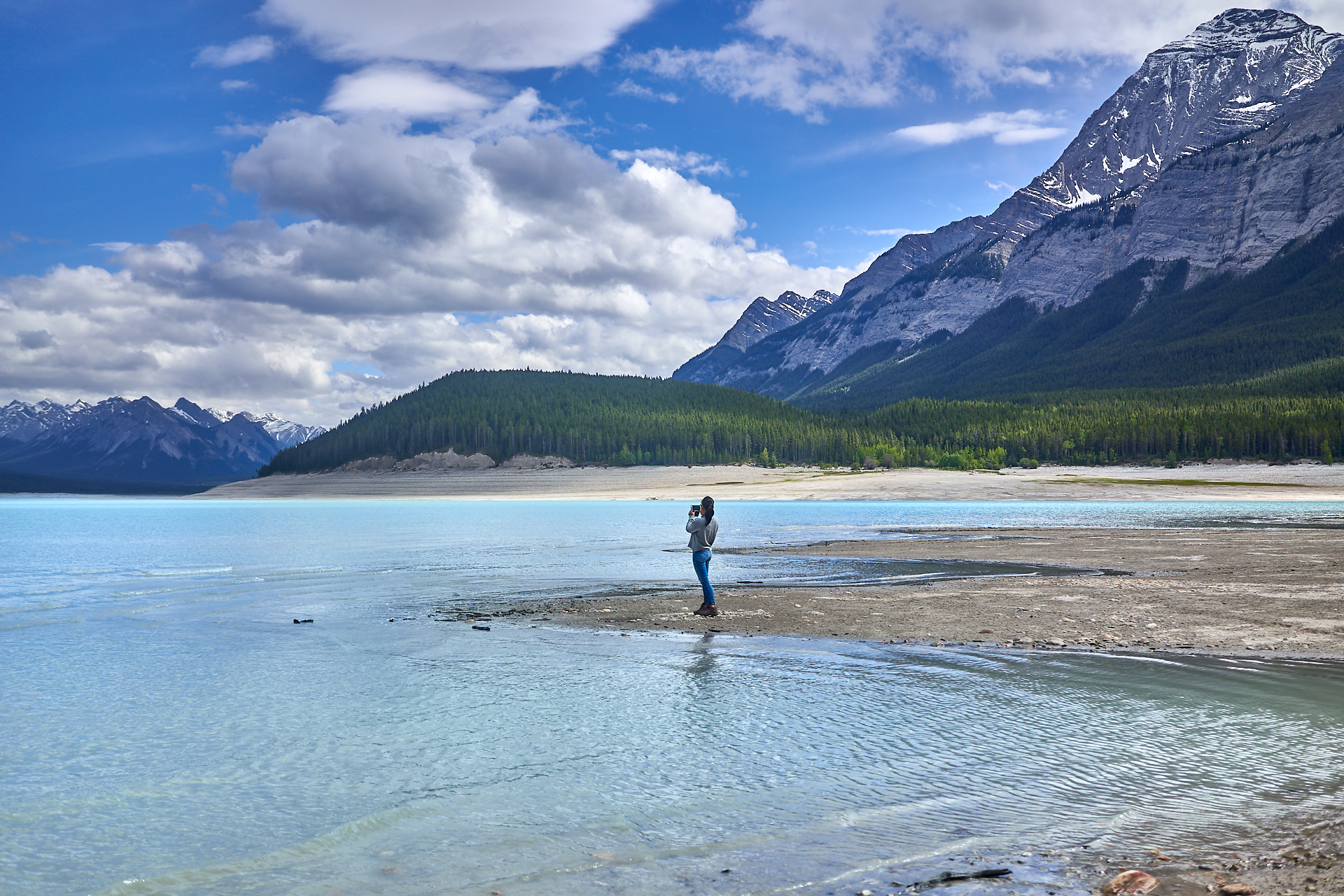 Friday night we flew into Calgary around 9. We made it to our hotel around 10pm as the sun was setting.  The next morning we went back to the airport to pick up our rental car. The thrifty agent let us know they had a “special” on 4x4s and he recommended it if we were driving in the mountains. It would only be twice the price of the compact we’d requested. We declined. Suddenly our original compact car disappeared from their system and we received a free upgrade to the 4×4 SUV. Golly, aren’t we special? We drove off in a brand new Hyundai SUV thinking we’d outsmarted the system (clearly they ran out of compacts and would have had to give us the SUV whether we paid the higher price or not). Fate wouldn’t let us get away with it…but more on that later…

We drove from Calgary out to Banff without stopping. We kept on going past the sights we’d seen in December 2016 to head to Jasper, which we had to drop from our list back then because the Icefields Parkway was too dangerous.

This time around, the only danger came from constant construction on the road and constant rain. And by constant I mean every day of the trip without fail.

At Parker Ridge, we saw nasty storm clouds coming in and ran back down from the top without hiking all the way down on the other side. I say we ran, but the trail was already mushy from days of rain so it was more like slipping and sliding. We both fell at different points on the trail but were able to stop ourselves from splatting an entire body part in the mud.

On the drive from the ridge to Jasper, we came across a grizzly bear grazing on vegetation near the road. We’d gone the entire Montana trip without seeing a grizzly, and the only black bears we saw were far up on a hill. This fellow was only twenty feet from our car. And, unlike in Montana, nobody warned us at any time about the need for bear spray. I guess, like the people, the bears are nicer in Canada. <joking, please don’t get yourself mauled and decide to sue me because you read it on line!>

The next day we visited Maligne Canyon, which is similar to Johnston Canyon in Banff in that it’s a series of waterfalls along a forest trail. Unlike Johnston, this one is a dirt trail which, like Parker Ridge, had (in parts) turned to a MOV demolition-derby style mud-fest by the time we arrived.

From Maligne Canyon, we tried to visit Maligne Lake by driving up the mountain into falling snow. By the time we arrived at the lake the restaurant had just closed and the mountain hid behind the snow clouds so we went back to Jasper to eat dinner and check-in.

Unlike our last trip to Canada (in the winter) we were able to find quite a few good restaurants. I guess the Michelin reviewers don’t ski.

On Sunday we visited Sunwapta Falls and walked down the trail to the river and back.

On the way to Pyramid Lake, we spotted more bears. First, a momma brown bear with a cub, then a wandering black bear. At Pyramid Lake, we stopped in the forest to sit with some young Elk grazing along a hiking trail.

At the lake, we watched fly fishermen for a bit.

We drove to the other side and walked out to the island. We didn’t stay long due to the cold winds blasting across the lake.

We attempted to take the Jasper gondola before dinner, but the same winds that blasted the lake had shaken the cables enough to shut the operation down.

On Monday we knew that we might see more blue sky than the rest of the week, so we switched our reservations to walk on Athabasca Glacier and headed down the icefield parkway. When we finally hopped off the arctic bus we learned the storms left a few feet of snow on the glacier, turning the ordinarily crystal blue wall into another heaping snow drift in the distance.

On the way there we’d seen a bighorn sheep standing on the side of the road. When we stepped out onto the glacier skywalk (a few miles up the road from Athabasca) a mountain goat made it’s way down from the hills to walk beneath the glass under our feet.

Two bears actually, an adult and juvenile grazing the same open patch of grass next to the road. Trying again for the gondola we went all the way up.

From the visitor center we could see Beauvert Lake, but not the traffic on the only road in. We pressed through to visit the Lake, thinking we could drive around the other side but found that road closed to auto traffic. After dinner, we visited Edith and Anette Lake.

On Tuesday we needed to make our way to Banff, stopping where we wanted along the way since we’d already seen the glacier. Barely outside of Jasper, we hiked out to the valley of five lakes; a series of oval lakes known for their deep emerald color.

An hour or so later we stopped at Tangle Falls on the parkway.

After that, the tandem of Panther and Angel falls, which aren’t actually labeled. Despite the unnecessary mystery, the adequately named Panther Falls was both one of the easiest to reach on the trip and most powerful.

With plenty of daylight left, I asked Sam to find something new to kill time. With no cell phone service, but a saved Google Map we only had a star and a road to go by. After twenty minutes of zooming down the road off the icefield parkway, we discovered the star was placed on an Icefields helicopter tour operation. However, down the road, a dirt path offered our 4×4 access to the Cline Riverbed. We’ve since learned that the river normally comes all the way to the banks, but apparently in summer (or for some other reason) when we arrived it had shrunk back from the banks maybe a half mile and created a beautiful shallow blue “lake” beneath jutting mountain ranges. (That’s the featured image for this post)

After spinning around a few times we made a beeline for Banff for dinner. However, yet again, we stopped to view black bears at two separate spots on the road.