This morning, my bestest buddy, Byron was featured in an interview on an art blog.  The interview was short and sweet, and I’m glad he decided to take a stance on the horrible Kanye West art/design trend we’re drowning in.  Byron is quickly making a name for himself because of his focus on textual (is that a word?) design elements.  I envy this focus as I know I’m still trying to find my “voice” – especially my painted voice.

But the fact that Byron was interviewed by a blog brings up a subject I’ve been curious about for some time.

Last week google introduced Buzz.   I’ve been using gmail almost since inception so I was one of the first on the Buzz roll-out (as were many of my frequent contacts).  When Buzz linked up with my other google services it automatically posted the only entry on my Blogger blog – which simply redirects everyone to this blog.  This automated buzz received one response: “This guy, blog guy. That’s so 2000’s.”

Is it?  I know Byron tweets and buzzes and facebooks several times a day (with many overlaps), but his blog receives much less “love.”  Just yesterday I found myself Buzzing about two artists (one Sam and I saw at the Copro Hi-Fructose show last Saturday).  A month ago I might have made blog entries about this, but those blog entries would have taken ten times as long to produce.  I’m starting to think that even for me, a blogging stalwart, the blog may only become the repository of detailed dramatic passages of life or artistic events.  Anything that can be quickly summed up can be buzzed.  Of course, I never updated my facebook status (ever), because I abhorred the “look at me” factor.  Somehow buzzing doesn’t seem as attention-whorish, perhaps only because (at first) the networks are smaller.  That will change though, and I worry I’ll be forced to leave Buzz behind as I did Twitter when my network starts pumping an average of fifty buzzes a day into my gmail inbox obscuring “real” and perhaps much more important email.

The blog is not dead for all, however, as the Art-blog community is thriving.  This suggests to me that far from the Blog being “dead,” it is actually getting fine tuned into the instrument of supreme personal content that it was intended to be.  When blogging first became hip, “Joe Average” started a livejournal to blog about what food he was feeding his dogs that day.  Now this mundane and useless chatter is much easier regurgitated on Facebook, Twitter and now Buzz; leaving the real content to Real Blogs.

The Proof in the Pudding is the fact that many of the facebook/twitter/buzz posts are simply some one’s expounding on what they’ve just read/seen on a blog somewhere.  This is great for premium content blogs – as the social network posters are advertising for them for free.  Google Reader plays a part in this too – essentially a buzzfeed of content you choose (not your friends) to investigate further or skip.

The downside of course is that conversation on the blogs themselves is going to vanish.   With content ferreted away (or linked) by social media from the source, the conversation now happens downstream among each fan’s social network – and not on the original blog itself.   A small price to pay for increased exposure.  In fact, likely a welcome change for most blog administrators – who will be all too happy to let Google now police the heated discussions and spam about their content.

So… after all that claptrap, where is my content?

Okay – after weeks of schoolwork taking up most of my time I shut out the outside world and did some drawing last night.  I tried working on the slimy green monster again – but I’m leaning away from it now – or perhaps leaning towards a stylized ink drawing rather than a painting.  The thing’s big eyes just make it look like a puppy dog rather than a menacing beast. 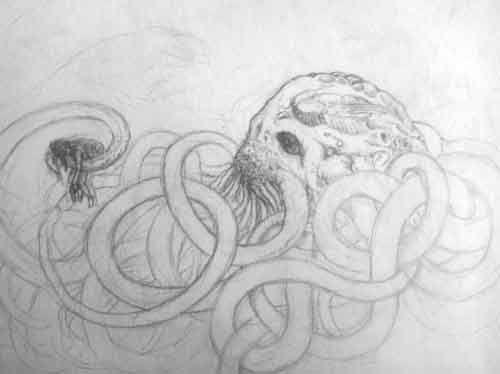 see… looks like a little puppy walrus or something, right?  And no, I have no idea what I was thinking with that skull.  Version 2 was better – but I didn’t take a picture.

I took a break from imagining Lovecraft and doodled something that I may do for my next full size painting:

(this is just a doodle – before anatomy correction, life study, etc. and taken with a cell-phone camera in low-light) 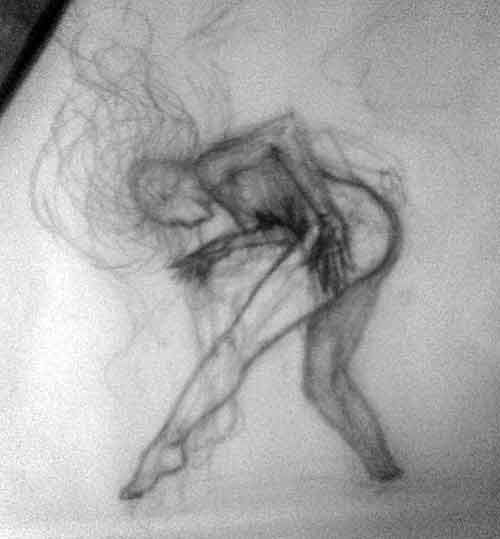 The more I look at it, this is heavily inspired by Eric Fortune.  The hands and the face are basically a reverse of his “nun coming up out of the water” piece.

I’m at a very strange point my artistic development right now.  I can no longer afford to fit the canvas to my image – I now, because of intense financial constraints, have to work with existing materials.  I’m not sure if I even have a canvas (or piece of wood) that is the right size for this, so it may have to wait.

3 thoughts on “Are Blogs Dead?”